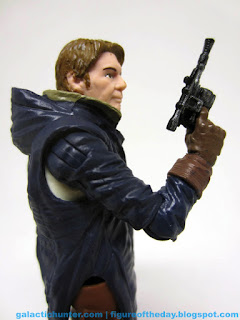 Bio: Though Han Solo has seen much in his long, checkered career, nothing compares to the abominable threat of the First Order's latest weapon.  In a foolhardy mission to save the galaxy, Solo races to the heavily fortified Starkiller Base. (Taken from the figure's packaging.) 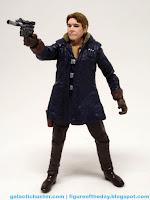 Commentary: This is another weird choice.  Han Solo in his new snow parka - not Hoth Gear, but certainly very blue - and Hasbro did a great job making it.   Why you'd make a super-articulated Han and not have it be in his primary costume that fans saw in the marketing and in the majority of the movie is beyond me, but Hasbro did a pretty good job providing a decent Harrison Ford likeness on a body with excellent hip articulation.   The paint job is acceptable, the eyes and smirk are decorated in a way that says "this whole is stupid, are you dumb kids done yet?" with hair that shows a bit of a struggle to replicate the color in the movie.  It's not greying - it's more snowed-on.  Mr. Ford's new toy looks more like a redhead who got hit with artificial snow.   On the bright side, when looked at under the right lighting and angles, it captures his likeness better than most figures from the past four decades.  That's a tough thing to do.

Articulation is really good - bend-and-swivel wrists let him hold his gun at all sorts of angles, or fish it out of the working holster.   The parka is nicely wrinkly, as are the pants, and so are the gloves.   Everything looks lived-in, but not too much.   He has some visible silver detailing, but on the whole the costume part doesn't need a heck of a lot of paint to look good as much of it is molded in color.   Painted elements are coated evenly and thick enough so that you can't see a lot of bare plastic shining through, and I appreciate that a great deal.   This is a figure capable of assuming some great poses, and in many respects may be one of Hasbro's better overall Han Solo toys.

His blaster is black, painted with silver scuffing via dots and a brown grip. It's gorgeous.  It goes in a brown rubbery holster, as is the style at the time.   While the Leia from this set is an argument to go back to 5-jointed figures permanently, this Han Solo's creation makes me wish we'd see more super-articulated guys.  I guess no mater what nothing will be perfect - but this is one of the better figures from The Force Awakens in any Hasbro scale.   I hope they carry forward with more like this, even the regular Han outfit and hopefully Luke and vested Leia, because they're good.   Maybe you won't be wowed - frankly, I don't think Hasbro is going to do anything to knock your socks off since we've seen thousands of figures and the price point has restrictions - but this is a figure you should buy when you see it.  He seems to be hanging around more lately, which is a shame as it's one of the better ones.