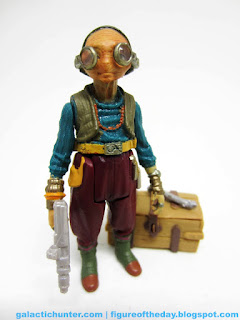 Bio: The colorful Maz Kanata holds court in an ancient castle on Takodana.  With centuries of experience, she reigns as the most knowledgable smuggler around.  She has an uncanny knack for sensing the shifting tides of fortune in the galaxy.  (Taken from the figure's packaging.)

Commentary: Toy companies can speak in some very sterile - and strange - terms, so instead of being a "gift set" or "DVD box" this is a "Home Entertainment Pack," as Hasbro refers to movies, cartoons, and the like as "the Entertainment."  It's true!  I've been in the meetings.   The crown jewel of this entertainment pack is the sole new figure, Maz Kanata.   Your friends will say "Katana" because reading is hard.  The set also contains Finn (roughly the same as the single figure), Rey (with a Lightsaber and slightly better deco), and BB-8 (with barely-changed paint masks.)  We might look at these later, I'm still waffling.  The set itself is worth your while just because you'll want a Maz, it's on sale for cheaper at big stores now, and you probably don't have a Maz if you didn't buy this set.   The line for this movie is pretty small so far, so if you have any doubt whatsoever about a character appearing in the sequel buy the toy now.

Maz is a short figure, the stand-in for Yoda and to some extent the more mystical aspects of one Ben Kenobi.   She knows about the Force without telling you how maxi big it is, presumably because she's seen some things, man.  After all, with those glasses and dime eyes she's probably seen quite a lot.   The lenses are clear plastic pieces attached to her head.  They are not adjustable, but they do magnify her eyes a bit.  I'd love it if they moved, but hey, she's small.  You can't get everything  You can come close, though, a her leg joints swing forward cleanly granting her access to just about any modern vehicle without a fight.  She might slide around due to her height, but all five joints move nice and cleanly.   Her deco is above and beyond the call of duty given Hasbro's recent, erm, less-than-collector-friendly output as of late.  She has painted bracelets, necklaces, belts, boots, chains, pouches, the works.  I'm sure you could do a slightly better job as a customizer, but as mass-produced toys out of China go this is one of Hasbro's best works in this size in recent memory.  The textures are great, and she looks better than the rest of the line would have me think Hasbro is currently capable of squirting out.  The skin texture, the careful wipe to get the skin the right shade of orange, it's pretty much all here.

Her own personal accessory is a small silver blaster.  Undecorated, it seems to have the design down pat without the exact coloring.  Paint on weapons has been a luxury fans haven't enjoyed as often as they might like, and while we saw some paint on lightsabers in the 1990s I'm trying to think if we saw many painted blasters before Attack of the Clones.   I'm not thinking of many.   Even after, it's a scarcity - but this set also includes a neat trunk with a weak bending flexible hinge to shut it, and a little latch to keep it closed.  Oh, and a lightsaber hilt to gift to Rey.

The mantra for this feature and much of what I write about Star Wars is "just different enough to make you mad."  If you were all-in since day one for this line, you've got little to no use for Finn, Rey, or BB-8.  However, you're going to really want Maz and her blaster, and probably a spare lightsaber and the trunk.  If you haven't been buying this line, I would recommend the Takodana Encounter as highly as possible at current sale and clearance prices.  If you don't have the figures, it's an attractive buy at $20-$25.   A changing of the guard seems to have directed Hasbro to the future - this would make me scared Hasbro may not revisit Maz without an appearance in the movies.  And we don't know if she's in the next movie yet.   If nothing else, I'd suspect you won't see many Maz toys for a few years so do yourself a favor and buy one before the secondary market prevents you from doing so.