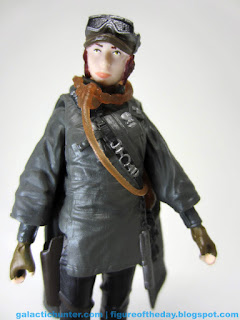 Bio: A highly skilled soldier in the Rebel Alliance, Jyn Erso is an impetuous, defiant warrior eager to bring the battle to the Empire.  Jyn has little patience for debated within Alliance High Command and often takes matters into her own hands. (Taken from the figure's packaging.) 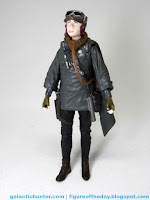 Commentary: Here we are a year later, and Rogue One launches right now.  It's not a lot different from The Force Awakens other than there's less of it, and smarter case ratios, like doubling up on this one.  The packaging for Jyn Erso is just like the rest, basically The Force Awakens with its difficulty to read and complete and total lack of co-sells.  Each figure exists in a void, with no real information about the movie or the fact that it's a part of a greater collection.   As the packaging in the old days served as a marketing tool for the entire line, it seems a crying shame that giant warning labels, 4 languages of copy, and a giant graphic for an app I'll never download take up valuable real estate that probably won't help foster another generation of collectors.  There's no call to action or anything to make kids ask for that next figure.   In short - I hate it. I hope it works,  but it seems dark and murky and uninviting. 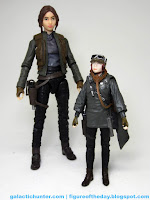 The figure itself?  Yeah, you'll want one.  It's not what I expected, but it's neat.  The vest is a separate rubbery piece which you can slide off, provided you remove her arms and head, so don't do that.   A blaster fits perfectly in either hand, which I should add are swivel-jointed.   That's right - seven points of articulation!  (But, so far, only on this specific figure.)  The breathing gear around her neck can be slid up and sort of fits around her face, which is pretty pale.  The paint job is adequate, but they're also doing more than older figures.  He's got a hat, goggles, lenses, eyes, lips, hair, and more painted - there's so much going on here that it opens the window to get more things wrong.   She has painted bandoliers, fingerless gloves, shoes, and more - the ambition was there. The factory did a pretty good job, too, but it's not perfect and I hope you get a good look at her in person before picking up yours. 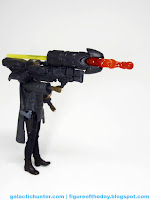 Her small blaster is perfect, and the bigger gun is better than the "Combine" weapons last year.  It's basically a big bazooka which she can hold in her hand and fits well over her shoulder.  If you pose her right, she can even hold it and remain standing - that's no small feat!  Especially for such small feet.   I like it in the sense that it works well, and she can hold it while standing.   I'd also be very happy if they removed it to get the cost down to $5.99, but of course I would.  That's what matters to me. 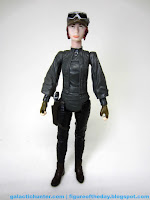 The 6-inch figure had some coloring issues in the skin as well, so this one isn't worse.   If you get in real close you'll see where things aren't painted quite right, but most of it is done quite well and Hasbro is painting more things than we usually see on a costume at this size.   With The Force Awakens I felt a bit more compelled to say "This is great, buy it" but in this case we already know at least two more opportunities to get a Jyn this size are coming - maybe more - so I'd say you could probably wait.   I doubt we'll see this specific outfit again at this size, at least in the near future, so get her if you like the costume.   I'm not sure I love it - I like it - but the next version of Jyn Erso is sort of the action figure of your dreams.  Assuming you dream of 1980, and I do.   I'd say if you see this version of Jyn Erso this week, and you've got a few bucks, snag one.  I don't think I like it as much as the debut Rey last year, but it's not like I think I even saw this outfit prior to the toy anyway.