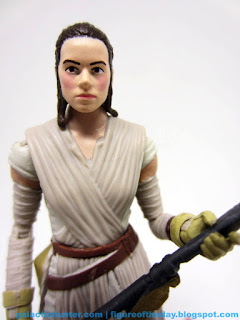 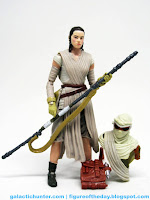 Commentary: Since this figure came out at about the same time as The Force Awakens, it would be a while before many fans saw this Rey on store shelves.   I lucked into her more than a few times, but probably not enough to feel she's common - well, OK, I've seen her a few dozen times.  But I get out a lot.   This one is a bit different from the other 3 3/4-inch figures in that she has both heads, gloved hands, and more articulation than you can shake a stick at.  Actually, that's a lie - she has a lot of articulation and a stick at which to shake toward her person.

Once more with 26 joints, Rey fits the typical template for The Black Series, which is either really exciting or really boring.  No new ground has been broken here, she meets the standards with exacting precision and minimal surprises - save for one.  The alternate head is pretty great, it wraps around her torso and the left arm slides through to hold it in place.    The figure is about as good as any other super-articulated figure in the past decade, and the detail on her face is incredible.  The problem is that the macro lens setting shows too much about how they made it great - I had no idea it was halftone red dots that gave her cheeks color with the naked eye.   In person, it's perfect with eyes and eyebrows that seem totes on fleek.  For a figure of this size, this may be one of Hasbro's best face executions.  Is it perfect?  Not necessarily, but it's very close given the materials and printing techniques.

In addition to her head, she has a staff - this time with painted details - and a backpack - also with painted details.  They look better than the normal version to the point where I'm almost irritated that Hasbro bothered to make the normal version.   For $13 we got a near-perfect super-articulated Rey with a really good bonus accessory in the wrapped head, extra deco, and a superior paint job.  For $9, we get a pretty good Rey, with a (frankly) unnecessary bonus accessory, plus deco that's OK.  It's not amazing - it's not as good as this - and the price difference is close enough that I would assume Hasbro should either do what it can to shave off a dollar from the cheap figure, or see if the economy of scale can be used to encheapen the Black Series figures and give them a wider audience.  As soon as we hit $10, $13 isn't a stretch anymore.

As Reys go, this is the best 3 3/4-inch one on the market today.  I hope you bought one - she's got gloves, she's got small boots, and she has desert-friendly capri pants?  It works, it's nice, go get one.  I am no longer at a point where I believe Hasbro will necessarily do more super articulated figures for the next movie in the trilogy, so get her if you see her.   She probably won't have this outfit again, at the very least.