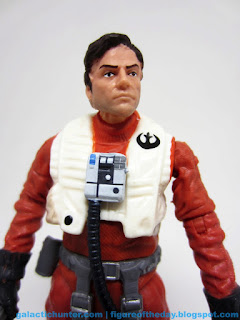 Bio: An ace pilot, Poe Dameron is a leader in the Resistance's fight against the First Order.  He soars into battle behind the controls of a modern X-Wing Fighter.  (Taken from the figure's packaging.) 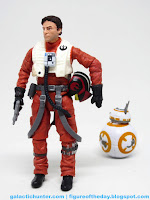 Commentary: Walmart's 3 3/4-inch line of exclusive The Black Series figures has been a source of immense frustration.   Waves hit and take a long while to saturate - in which time people lose their damn minds, myself included.   Poe Dameron was one of last Fall's two batches of figures from the then-new movie, and the one (along with Finn) most likely to sit.   Fans were agitated because pulling the highly popular - but unvaried in character - line from mass retail to an exclusive at the highest trafficked store in the country left something to be desired.  Would you ever see these figures???  The answer turned out to be "yes, eventually" which was true of pretty much the entire line to date.  It's not as bonkers as it used to be, but the wait is miserable, long, and if you're outside a city with more than one or two Walmarts, seemingly eternal.

The internet's boyfriend  seems to be challenged in translating himself to plastic.  The skin is never quite right, the expression's not always perfect, and Oscar Isaac's a decent looking dude.  He's peachier and paler than he should be, but the eyes and eyebrows are good on this particular head sculpt. S subtle hint of scruff appears, but it's so faint you might not miss it if they left it out.  I'm glad it's there.  His costume is simply painted, with plenty of orange and white to replicate the Resistance costume form the movie.  He's (as of yet) the only super articulated pilot, and boy howdy did they do a nice job here.

24 points of articulation - for the record, I'm counting a point of articulation as any place two piece of figure are joined and can move - are nothing to sneeze at.  Ball-jointed hips!  Swivel wrists!  This is the kind of figure fans have been wanting, and so far it looks like they aren't getting (immediately, if at all) for Rogue One.     On the bright side, you can find Poe on clearance at a Walmart for around ten bones now if you're lucky. 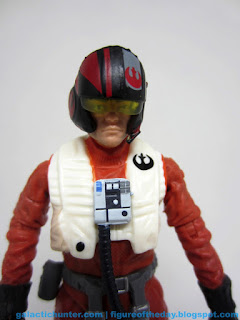 His accessories are simple.  In addition to the non-removable straps and hoses, he has a removable black helmet with clear lenses and a blaster which fits in his hand or his holster.  It's not gratuitous, nor is it innovative, but it delivers the goods in a way that is consistent with collector expectations.

While Finn has a lot of figures, Poe's are more varied.  Do yourself a favor and get this one, even though you probably already have this outfit in this size.  It's just a nicer figure, with better gear, and it's not like your other ones have elbow joints.  It doesn't amaze - the figures rarely exceed their mandate when toy features are ignored - but at least he looks cool.  Also thank your lucky stars simpler figures exist, he's a hassle to try to cram in an X-wing.  Poe (along with the Rey, Kylo Ren, and Finn from this line) occupies a place on my desk since I got them, which is probably the highest praise I can give a Star Wars toy lately - usually stuff gets shuffled off shortly after purchase so I can make room for the next thing.  These ones are pretty great.