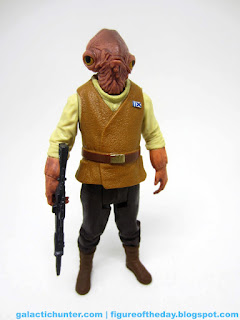 Bio: A veteran of The Clone Wars and the Galactic Civil War, Admiral Ackbar has decades of experience in large-scale combat operations. Even so, the Mon Calamari officer has doubts about The Resistance's chances of success against The First Order. (Taken from the figure's packaging.)

Commentary: It's a new figure!  Admiral Ackbar is and always will be one of my favorites - when I was a kid and I found out there was an alien lobster man, I had to have one.  It was just too awesome to fathom.   I hope Admiral Ackbar was as excited to exist as I was to have him, but I feel for the guy.   32 years, and no promotion?   Seriously, the intergalactic military sucks.   The figure looks like the movie, and doesn't really have the kind of articulation you want.  But he does have a wacky jet pack, which every Admiral Ackbar figure needs.

The figure itself is pretty great.  The texture of the vest is top-notch, the skin color is pink and salmony, and the wrinkles on his skin are perfection.  They even put a little wipe on them to bring out the suction cups and other tiny details.  The pants are similarly nicely textured with legs that swing forward until the thick tunic prohibits further movement.  It might fit in a vehicle, but the arms are sculpted out a bit and I don't think most vehicles are going to permit him to fit inside.  At least he can stand and hold his weapon, though - plus the jet pack fits perfectly. 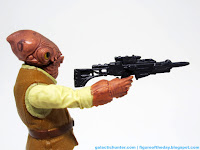 Ackbar has the same shoulder and hip joints that this line has been famous for, and the neck is stuck in place thanks to his collar.  To make up for this, Hasbro added a hinge joint in his mouth so Ackbar can, uh, "talk."    It's a little crude but it works and I love it - things like this add a lot of value to an otherwise plain and ordinary figure.  EV-9D9 had a mouth in the 1980s, R2-D2 had a clicking dome, R5-D5 in 1996 split down the middle and launched a rocket.  Why?  Who cares, it's fun!    I appreciate their putting a little something into these figures to make them genuinely more interesting, mostly because it does something.   Love them or hate them, the slide-out lightsabers of the 1970s are memorable nearly four decades later because it was functionally fun and interesting, just like the head here. 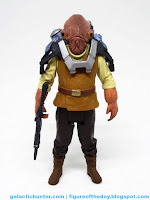 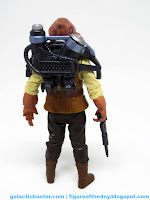 His jetpack seems to be designed for him specifically, and as a stand-alone accessory it's OK.  It's not very Star Warsy, but it does have some blue and grey on it and it fits like a glove.  Expansion ports allow for Tasu Leech's gun or Fifth Brother's claw to connect to it to be some sort of exo-frame thing, which is similarly not very Star Warsy.   I'd say it's sort of a waste ultimately, but it's not like it cost us the opening head gimmick - and that I like.

Overall?  You're going to want it.  The actor Erik Bauersfield voiced the character a few times and this may well be his final turn as the alien commander.  He passed in April of this year at the age of 93.   He was largely unknown (or at least not famous) from his role in the saga, but now you know that he was a talented old-time radio guy and you've got yet another figure to snag of one of his most famous roles.   I love it - even if the blaster is rather uninspired, the rest of the figure is a complete winner.  Get it if you can!