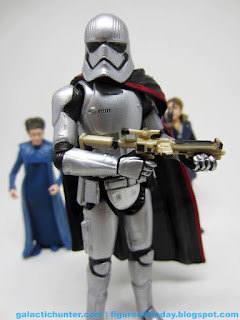 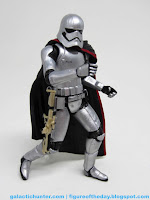 Commentary: And here's one you won't see - she always seems to go first.  Captain Phasma came out as a basic figure, an Armor Up figure at Toys R Us, part of an Amazon set, and you've probably had your fill of that figure - so here's the new better one.   She has 26 points of articulation which, somehow, became the bare minimum for a super-articulated trooper.  There are no double-jointed elbows or knees but they are the classic ball-ish movement we've all accepted as normal, and they all work quite well.  She stands just fine, was painted well, and can hold her weapon.  It's a good one... but it doesn't so much more than that. 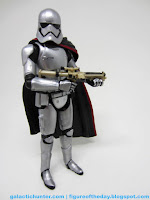 This figure hits the important notes - nice plastic cape, good blaster, decent deco, and Hasbro goes above and beyond the call of duty by ensuring she has a good silver paint job, at least on parts.  Some are molded in silver.  The match is largely good, so you may not immediately notice some are swirly silver and some are cleanly painted.  I'd rather it be consistent, but it still looks pretty good.

This is the go-to 3 3/4-inch Phasma.  I assume you'll see another one some day - maybe even a reissue - but if her outfit doesn't change I assume Hasbro won't or can't do much to improve on it.  It'd be interesting if they did, of course.  As it stands the sculpt doesn't seem to improve too much on previous iterations, it just adds more articulation while keeping that wonderful thigh-plug to store the blaster.  It's good!   It won't surprise you, but it delivers what you've come to expect from this size around this price point.

Collector's Notes: I got mine from Walmart thanks to help from a pal.  Be back Friday as we kick off the Rogue One line.