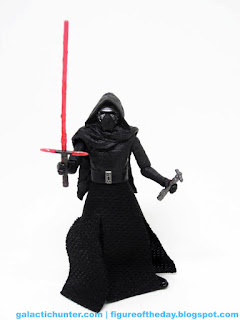 Bio: A dark warrior strong with the Force, Kylo Ren commands First Order missions with a temper as fiery as his unconventional Lightsaber.  (Taken from the figure's packaging.)

Commentary: When it started to look like the basic line for The Force Awakens would take a step back in articulation, fans were sort of glad to see Walmart got The Black Series again.  It just took months for the new characters to hit, and even longer for Kylo Ren and the non-reissued figures to make the rounds at America's biggest and generally most crowded retail chain.    Being the bad guy, he was also one of the immediately most popular - but with a Stormtrooper and Rey hitting around the same time, there was a lot of success to go around in the wake of one of the biggest movies of all time.   Rightly so - this is more or less the figure you were hoping for prior to seeing the movie.  There's no unmasked alternate head, but you do get the accessories that would make sense for the bad guy.   Or at least, who we're all assuming is the bad guy.

26 points of articulation means he can stand and hold his weapons fairly well, but thick plastic robes under his nice cloth robes means sitting can be difficult.  If and when he gets a vehicle to pilot, this isn't the figure you're going to fit in the cockpit.  Heck, neither are the other ones - none of them are particularly vehicle-friendly.   He has no problems double-gripping his broadsword lightsaber with both bend-and-swivel wrists, so that's a big plus - and the design recalls the original Darth Vader figures with its horizontal lines around the arms and hands.   The sculpted hood around his helmet is a mixed blessing - it looks great, but it removes the option of letting you see just a helmet.  The neck peg doesn't match the regular 3 3/4-inch line, so straight-up swapping may not be in your future.  As is, though, he's pretty fantastic - and the texture on the fabric is next-level stuff for a Hasbro figure of this or any size.

He has a lightsaber hilt and a lightsaber, each of which has some nice painted details.     Obviously the genuine article looks more cobbled together, but you can see some stray parts and wires on this one.  Neither has the attributes to connect to a belt, unfortunately, but other than that the figure looks good.  It seems Hasbro was aiming for the boxed collector or perhaps the shelf fiend, so those seeking a toy aren't going to find it here.  This is a great display piece, and easily your best-possible Kylo Ren for the average adult collector with the average adult collector standards.   He stands, he poses, and he stays put.  You could do worse.   I'd love to see what a Kylo Ren with some toy features might do, though.

You can, however, swap his head with that of the "unmasked" Kylo Ren figure. It fits perfectly.