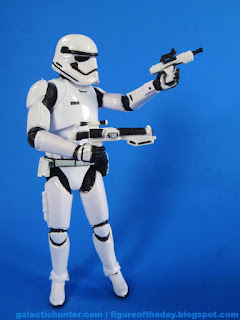 Bio: Equipped with sleek armor and powerful weapons, the Stormtroopers enforce the will of the First Order. (Taken from the figure's packaging.) 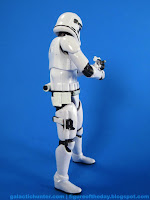 Commentary: A later release for The Force Awakens, this First Order Stormtrooper adds all the articulation you'd expect with a paint job that would be wonky for the 1990s.   The sculpt and articulation are fantastic, and the paint is as sloppy as it gets.  I've bought a lot of figures, and I can say without a doubt that this has the worst paint job of any trooper figure.   The band on the forehead doesn't quite seem to be placed right above the lenses, there are numerous black smudges and streaks, the white paint on the belt isn't thick enough, and yet people continue to tell me this was the superior figure.  I don't get it.  I would like to agree with those who love it, but really, you're just being apologists.  Maybe you lucked into a good one, but even the best ones are still not as great as they could be. 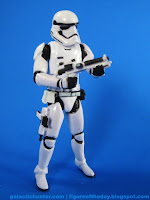 Another 26 joint wonder, this Stormtrooper can do things like stand, sit, put both hands on his blaster, and plug his two blasters into his thigh - just not at the same time.   The figure has more paint than the 3 3/4-inch counterpart in the main line, as he has a little more detail on the chest armor and the more accurate hands with white on the fingers.  The black horizontal line across the back of the hand doesn't seem to be true to the movie, though, so if anything Hasbro could probably reissues this figure with better paint - and a few fixes - and it'd be the best one.  As it is, it's just OK.

Some of the white plastic already feels to be slightly discolored, but that might depend on the light in your room.   Some more black paint on the helmet would help, as the eyes and mouth should be connected with more black paint.   Hasbro also gave this release black soles on his boots, which the regular cheaper version lacks.  In short, neither version is truly superior.  Each has its pros and cons, and I'd say we should all hope Hasbro has an opportunity to redo it for the next sequel.