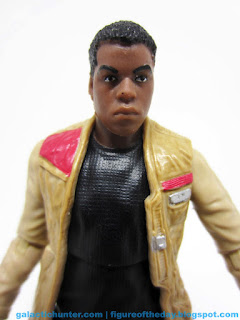 Bio: A trained warrior desperate to escape his past, Finn is plunged into adventure as his conscience drives him down a heroic, but dangerous, path.  (Taken from the figure's packaging.) 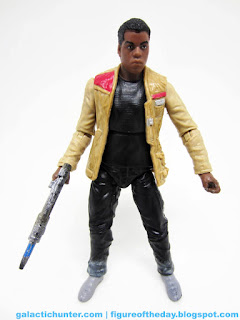 Commentary: Sometimes Hasbro delivers the goods that fans didn't want.  With The Black Series it was no surprise that Hasbro focused on the main important characters, but Finn was the last of the main characters to sell.   Most stores sold the other Finn toys by now, but it's not uncommon to find this one hanging out with Poe on markdown.  I have theories as to why this is, but one would hope those reasons might help a wider audience to embrace the figure.   Everybody loves Kylo Ren and Rey, but Poe and Finn don't seem to have quite the love as of yet.  It's a pity, but having multiple Finn figures in this exact outfit can't help things.   Poe benefits from being more or less unique with a good, clear-visor helmet otherwise unavailable without a vehicle.  Finn's main improvement is articulation.

The lovable goofball has 26 points of articulation - the same as Poe with added bend-and-swivel wrists, and he can get more out of them thanks to a lack of straps or other restrictions.   He can stand - and has stood on my desk for months.  He can sit, but it's awkward - the hips splay out so it's obvious Hasbro assumed (correctly) that most people buying this figure would either leave him in the package or just have him standing on a shelf, which is sadly the fate for many collected action figures these days.   All of that articulation, largely wasted.  At least he can double-grip a lightsaber, which no other Finn can do.   The sculpt is basically the same as other Finns, which means he has a top-notch head sculpt and a decent all around costume.  Lots of wrinkles, lots of folds, and a mid-torso ball joint for plus posings.

Deco has been improved!  The blaster has black scoring and burn marks, plus some blue energy markings.  It's a huge improvement.  His shoes have some more dirt, as do his pants.   Even the zipper gets a dot of silver, making this the best 3 3/4-inch Finn your toy display money can buy.  The regular ones are perfectly nice and good for vehicles, but if you want a figure to stand around on a shelf this is probably your best bet.  It's a shame they didn't toss him a lightsaber, but whatever.  You've got lightsabers.