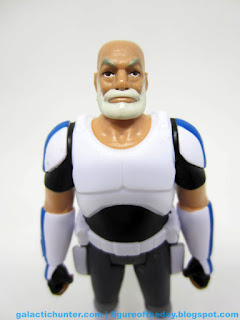 Bio: A veteran of the Clone Wars and still a formidable warrior despite age acceleration, Rex avoided Order 66 by removing the programming chip which would have turned him against the Jedi.  (Taken from the figure's packaging.) 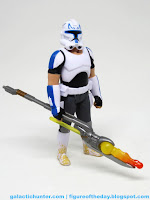 Commentary: He's back! And so am I! The man behind the mask is Captain Rex, who survived The Clone Wars and was ripped out of retirement to go up against the government who created him.  This could be a really great story, a spin on monster movies, or a revenge fantasy of the first order.   What we got was someone who doesn't really seem to have a heck of a lot of qualms about going after his old boss, which makes sense for a kiddie show.   Dwelling on the politics might be kind of dark, but what's exciting to me is that we got to bring back some really awesome characters from a fun TV show and I have this figure.  Not having this figure would be upsetting, mostly because this is the kind of thing I love about franchises - finding out my favorites lived, that my heroes aren't dead.   ...The Force Awakens robbed me of Han Solo and Leia being alive and young and together forever, so thanks for that.   But with his sped-up aging, I assumed Rex wasn't long for the world so it was nice to see him around and active and kicking.  With a beard!

In his retirement, Rex still wears some of his old gear.   I won't dump on the idea of anyone, anyone, keeping your pants and shirts in order for 20 years without needing replacements, so let's just go on about how this figure is similar to its show in that it's super-duper cleaned up.  Hasbro probably could have given us the battle-damaged grizzled soldier of our dreams, but the figure is mostly shiny anew new except for some dirt on his boots.  It's distinctive, but I bet Hasbro could have left it off and none would be the wiser.   While I would love to say that the 5-jointed, simplified figure is all about the budget I'm thinking it might be more about direction - especially a year after this line debuted.   If you take a step back from the 3 3/4-inch suite we were offered, all of it is kid-friendly with firing rockets, simplified figures, buildable weapons, smaller vehicles, and typically not things the old crew loves.   Hasbro really geared its many strains of The Black Series figures/vehicles/props at the old folks - this is a kid line, and it delivers that experience nicely. 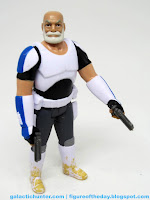 Rex looks a fair amount like his CG model, although his beard now matches his dyed hair.  Sure, why not, let's say they have beard dye in the desert.  (Maybe it's just white, but the eyebrows are grey, and the beard is not.)   The face is good, looking like a guy who was in shape got a little older - the same is true of his build.  It's bulky, but not chunky.    You can see bits of his arms poking out from where his armor isn't, and he seems to have salvaged pilot boots and pants somewhere at some point.   The design is fun, and the working holsters carry two little pistols he can hold in his partially gloved hands.   Why he cut off the fingers, I don't know.  But he did.   The helmet is a good translation of his old The Clone Wars Phase II bucket, complete with some marks from the series.

Sadly Rex can't sit as well as I would like due to how the hip joints were cut.  The 2013-2015 Saga Legends/Mission Series figures mostly were engineered with top-notch t-crotch joints which sacrificed a bit of its aesthetics for a generally better range of motion.  Since we don't have a Ghost, well, I guess it doesn't matter yet.  If we ever got one, I'd be more ticked off - for the time being Rex doesn't have a vehicle to call his own. He can stand, though, and he looks good on my desk.  He's been there for months, and I quite like him.

He also has a stupid rocket-firing staff thing.  I've really lost any sense of wonder for these, mostly because they don't look like anything in the movie.  If they gave him a gaffi stick with a launching pommel?  Sure, why not?   Perhaps a small active thing we saw on the show would have been interesting, but this is just more junk drawer fodder that adds to our costs under the guise of added value and dashed expectations of "collecting them all" to entice kids to built a bigger weapon.   It has some paint on the tip of the blade and the projectile, and it doesn't even work all that well.  You've really got to jab the point of the marble-shooter rocket in your finger to get it to shoot out, and it's incredibly weak.  Springs and buttons cost money, sure, but I've seen better marble shooter rockets in Transformers over the years.   It would be impossible for Rex to hold the weapon while you shoot it - he'd fall off.   Since it's a weak toy and beyond what was needed to make a figure decent, I'd say I'm more than allowed to tell you that it's dumb and I hate it.

I like the figure.  I like his pistols, I like his helmet.  I like Rex.   If they dropped the staff and cut the cost by 50 cents or a dollar, I'd be very happy.   As it is, it's just more plastic that I feel is a waste, but that's me.  I like cheaper things and things that are more fun.  Rex will scratch your itch for the very popular figure, and for whatever reason he's kind of cheap if you can find him.  I would suggest tracking him down if you're a fan of the animated shows, especially since Hasbro mostly delivered on the crew from Rebels.  I'd argue they kind of dropped the ball on meeting demand for Sabine and Hera, but it looks like that might change soon.  Real soon.