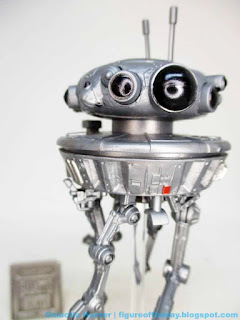 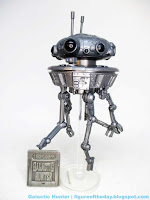 Commentary: The Viper Probe Droid figure is one of those things that are both awesome and upsetting. Kenner and Hasbro have shown the Probot as this big thing, huge, imposing. There's very little in the movies or reference photos to deny that - in The Empire Strikes Back it's not like you see them right next to a human, and the perspective of any behind-the-scenes photos make him look huge. The same was true of Jabba the Hutt, who is by all accounts not a tall slug without his throne, and Max Rebo, who Kenner (and cartoons) gave legs and feed in addition to the arms that play the keys. Toys are very capable of changing our perspective, and according to most resources a probe droid is about 1.6 meters tall. That means Disney's new, smaller droid is probably the most accurately sized model you can buy as a 3 3/4-inch fan. 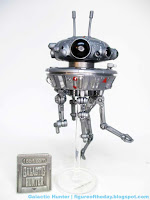 This is a good figure, but may disappoint in terms of articulation. It's stunning in terms of sculpt and deco, with great paint wear that's subtle and looks superb - there are other painted elements too, like the shiny black eyes. You don't see the stuff under the eyes that are in various photos - it's just black. I love the sculpted detail arund each eye, and the tiny rivets are a nice touch too. A few subtle red shapes are scattered all over the figure, giving it a bit more visual variety without being distracting. It's a good design and Disney translated it nicely.

In terms of articulation, it's peak "good not great." As a display piece? Perfection. As a toy? It doesn't move the same as previous droid. The antenna don't go in and out. The legs are removable for some reason, but won't swivel on the body despite what appears to look like a sculpting joint. Each arm has two to three points of articulation to bend, though - some are just ornamental, and none of the claws open. It's a good figure for the money, but there's always room for improvement. Back in the 1980s, kids with the Turret and Probot playset had arms that only moved at the body - and that was it, and we liked it dagnabbit. We didn't get a clear stand, we rammed a white pole up the droid's underside and then used the same pole to blow him up. 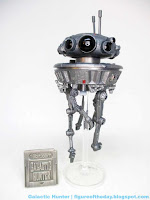 So assuming this is the right height, it's a pretty good figure and the entire set is an all-around decent value. Now that Hasbro will be charging what I think I can safely say is an absurd $17.99 per The Vintage Collection figure, a Disney 4-pack of Droids for under $50 seems like a steal - especially with new molds. This is a good figure in a good set, so I suggest picking it up if the price is at or around $50. If Hasbro made a similar droid and slapped it on a regular Vintage cardback - even at $18 - I'd say it was a worthwhile purchase.

Collector's Notes: I got mine from my pal Greg! Thanks Greg.

Very good points. I was flashing back to that classic playset throughout the review. Someday we'll finally get that deluxe probot I've been hoping for with all the articulation in a definitive size and sculpt for the 3 3/4" line.

For now I'm wondering why this particular Viper Droid appears to be silver when all other images, even from other reviews, make it look gun metal grey.

Hope you had a filling Thanksgiving. :D

Check this link for the definitive scale of the probe droid - especially the ROTJ hangar shot and TESB backlot black and white photo. It's about 1.9m tall, definitely taller than a human though not by a lot. The Last Jedi line Probe Droid w/ Vader is the most accurate yet
https://www.themodellingnews.com/2018/05/in-boxed-112th-scale-imperial-probe.html