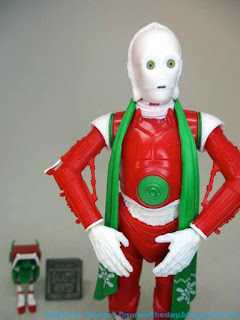 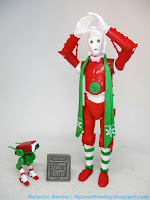 Commentary: I skipped over the first batch, but this came up at work and I like robot toys. The Protocol Droid (Holiday Edition) is a weird design, but I couldn't quite put my finger on why it looked so familiar until it showed up on my desk. Is it an elf? No. Santa? Not really. Wait a minute, I know those socks. Even though I think this is a generally neat toy, it's always hard to buy a collectible figure for the sake of it being a collectible figure, rather than a cool thing from the other cool thing that I watched. Due to manufacturing problems and freight delays, Hasbro completely missed Christmas 2021, and I bring it up because this figure (whose date stamp of 13011) implies it was produced October 28, 2021. This means it may have been sitting in warehouses and boats for a year before it got in anybody's hands. But hey, now it can be yours!

These figures are a gaudy exercise and a monument to holiday consumer excess - but so is toy collecting, so I can't fault game respecting game (and/or synergy.) For those with a droid collection (or those who specialize in holiday figures) this is sort of neat but I do find myself wishing it was 3 3/4-inch scale so it could be cheaper and take up less room. I don't think you can squint and picture this figure in any particular movie or TV show or comic scene, so it basically exists as a holiday decoration, in a box that looks like a can of Diet Coke. It's not your dad's action figures, those hewed closer to TV and the movies. 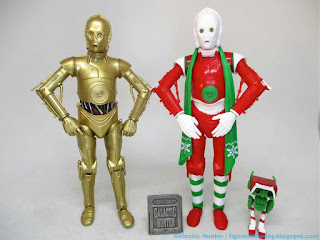 The 2015 C-3PO mold was given Lando Calrissian's 2018 scarf, and a BD droid sidekick from the Fallen Order game. A droid mostly molded in red with white hands, shoulders, and head is a departure from previous releases of C-3PO - of which there are many - but the $8 upcharge stings a bit. The eyes are painted nicely and if they'd left the green paint apps off completely, this could probably fit in (somehow, somewhere) with your movie stuff. The green stomach and stripes socks sure are weird, but I will say this doesn't look like any other 6-inch scale protocol droid from this mold. (The only options are C-3PO or 0-0-0.) He stands just fine, you can move him around a little, and the arms are pretty stiff. Functionally, this is a very good action figure for the whole open-and-display crowd. 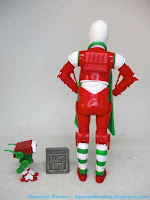 If anything, the figure is helpful as a reminder that I am aging, and new generations of fans see these things differently than I do, and we old-school Kenner kids don't dictate the future of everything. This is a holiday decoration, but growing up I pretty much saw everything as a toy. Collectible, schmollectible - you should play with these things and they should all fit the same scale! But that's not the case - 1:6 scale figures give unmatched realism (and are priced accordingly), and figures like this aren't meant to be a toy. It's a gift, it's a holiday decoration - you probably won't be pretending it will some day go in a big diorama or in a vehicle. You're supposed to put it out for Christmas, and then put it away before you go back to work after the new year. It's another example of Star Wars toys growing up, which is something I have generally never wanted to happen. The scarf doesn't not fit but it's a little nonsensical. The BD droid looks perfectly fine, and really helps cushion the "exclusive tax" we seem to be getting a lot more this year. $28 for one droid would be absurd, but $28 for two? It's a bit easier to swallow than just getting a repaint with no extra stuff in the box.

As a consumer product, as a holiday decoration, it makes a lot of sense. As part of Hasbro's massive ongoing action figure collection output, it's goofy. The various metallic, credit collection, and holiday figures combined with photoreal repaints have certainly made for distinctive - if expensive - elements to a collection that certainly made me reconsider and ultimately torpedo my sense of collecting them all. But one? Or a couple? Sure, why not - I like robots, but this is a very, very silly figure that will most likely end up in the back of the shelves where it will remain until I have to move once again. I don't feel the need to buy a dozen holiday guys to the tune of $250 or more. But I like this one.