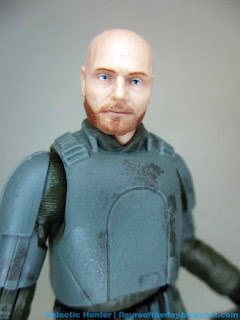 MIGS MAYFELD (Morak, but not called such on the package)
The Vintage Collection 3 3/4-Inch Action Figure
Item No.: No. F5566
Manufacturer: Hasbro
Number: #229
Includes: Helmet, blaster
Action Feature: n/a
Retail: $14.99
Availability: August 2022
Appearances: The Mandalorian
Bio: Ex-Imperial sharpshooter, Migs Mayfeld was once the smart-mouthed leader of a gang of criminals. Mayfeld’s skills help The Mandalorian to rescue Grogu from Moff Gideon. (Stolen from Target. There is no bio on-pack.) 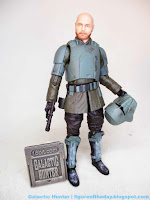 Commentary: "Haven't I seen you some place before?" Migs Mayfeld is almost the same as Din Djarin (Morak). There's a new head, but what I find the most interesting is that they corrected the figure between his packaged sample phase and the final release. On Target.com, the photo has the red sleeve with the yellow boxes - the final figure is plain gray, as seen in the photos here. It's worth noting the 6-inch figure also incorrectly had the red sleeve on the final, so it's good they corrected it for what I guess I am going to keep assuming is the scale-of-record. 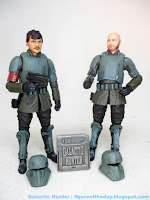 As you saw in the last one, this figure seems to be a mix of new and old parts. The result is a figure with a state-of-the-art head, with excellent deco, on a body that's kind of old hat. The articulation isn't as good as the newest figures, as the weird swivel/hinge hip is still there, but at least he looks incredible. If I didn't have Din to compare him against, I'd say he's awesome - but Hasbro cut corners, and putting identical damage on the torsos and helmets who should share piloting duties/diorama duties together is a bad look. It was done to comical effect in Transformers War for Cybertron: Siege where over half a dozen Decepticon jets had the exact same battle damage markings. Much like Din and Migs they were an excellent design, it's just the repetition that is utterly silly. 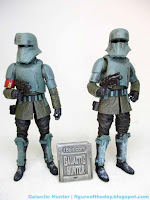 What's really amazing about this figure is the head. The 6-inch one is good, but I would say he looks even better at this size - the facial expression is nearly an eye-roll, a pre-sneer that you can practically hear saying something like "good job, dummy." It's Bill Burr, and it's funny that Hasbro may have produced the very best stand-up comic action figure sculpted likeness to date. The beard may not be perfect, but it's tough to do at this size - it's certainly good enough, with the eyes and face turning out quite nicely.

The legs surprised me - mine had upper-legs swiveled around, so I elected to keep them that way so it looked different than Din. The damage on the boots was also painted slightly differently, and I'm all for it. Overall Hasbro did a good job on this one, fulfilling their destiny of budget-cuts with reusing tooling but also giving us two incredible head sculpts. It's one of the few things that makes The Vintage Collection a bit of a heartbreaker - when Hasbro makes an all-new figure these days, it's almost always one of the very best things they've ever done. And then they fill the wave with reissues and reused parts that they've proven aren't as good as what they can do, but since we're unlikely to get a new Imperial Juggernaut for these guys to pilot I guess it might not matter anymore.

Without a vehicle or a playset, these guys will either just stay carded forever or be opened and stand in a nice display shelf somewhere. It also serves as a reminder that somehow, for some reason, Hasbro can give us figures if Ming-Na Wen, Bill Burr, Katee Sackhoff, Pedro Pascal, and others that look excellent. And complain as I do about redux figures, I think we can all say we'd like to see what this new Hasbro design and engineering team can do (if anything) to get us a perfect Harrison Ford in Star Wars at this point. Clearly, the technology exists to do amazing work - but I digress. If by some miracle your Target still has 75% off Migs Mayfeld figures, go buy one. It's good for $15 and it's a steal for under $5. I regret not clearing them out at that price.

Collector's Notes: I got mine from Target. He was marked down 75% off weeks after being released and was completely gone from most stores in under two months - that's astonishing impatience on Target's part.

The red armband version did indeed make it out in some quantities. They're more common than the gray/green version overseas, and also turned up in early shipments from Target.com and in some stores.