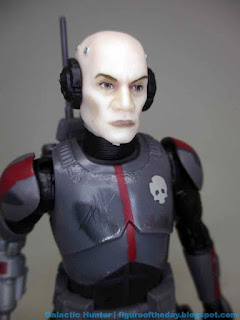 Bio: Echo was a soldier in the Grand Army of the Republic, known for his strict adherence to orders and rules - hence, the nickname, which was sarcastically gifted by his clone brothers. (Taken from the packaging.) 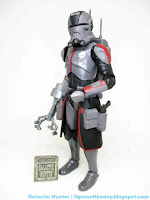 Commentary: For whatever reason The Bad Batch skipped 3 3/4-inch completely for its main characters so far. For The Black Series, Clone Force 99 has shown a lot of shortcomings - Crosshairs and Hunter were missing some key paint apps, even Wrecker. Echo looks pretty great, and I assume that's because this figure was developed after two price hikes in recent years. Having gone from $20 to $25 I expect a "premium" figure to be somewhere between "excellent" and "perfect," and this one certainly hits "excellent" pretty well. It also makes a compelling argument for Hasbro to consider some sort of platinum-edition figures and just go all-out because some key paint operations - specifically, the abundant armor scuffing - is generally absent.

This is not to say he's completely clean - you can see some excellent black or silver splotches that would look just phenomenal if you didn't know something was missing. If you just saw this figure with no context, you'd love it - sure, you'd notice the sculpted crapes and scratches that are unpainted eventually, but the red trim, the Clone Force 99 skull and logo, and the copper vents on the backpack will distract you from any perceived slight. The figure's holster works, the articulation is great, and he has plenty of accessories - all of which can attach to the figure without fear of losing them somewhere. 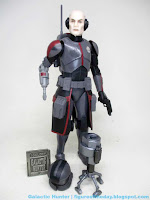 The figure is a mishmash of new and old clone parts. The helmet is somewhat difficult to position because it also has to fit like a glove with the Lobot-esque cyborg headpiece, but you can do it with some tools and patience. (Note: no toy aimed at kids should require either.) The pale clone head looks great, and as someone who is almost a zombie thanks to his near-death experience in The Clone Wars is a neat fit for this month of monsters. (Granted, he's not a monster, he's a nice guy.) For a figure sold to an American mass-market audience, it has all the articulation you'd expect and an overall acceptable range of motion.

There's so much going on with Echo that it is reasonable that he may cost a tiny bit more than some others - which makes it sting when we see figures with less deco be sold for $8 more than this guy. Hasbro did a good job here, there's even a red "tooth" on the "mouth" on the helmet that's the size of a pin prick. It looks like someone went to the mat here to do a good job, and while we can all nitpick and show how they could do even better, this is an improvement over most of what Hasbro has done with Clone Force 99 thus far. If you only get one Bad Batcher, this may be the best (or at least most interesting) one so far.