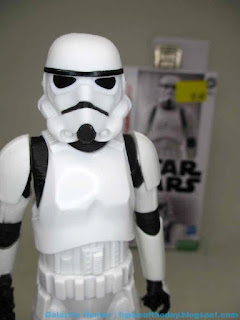 Bio: Plastic-free packaging! (Taken from the figure's packaging. There is no bio.) 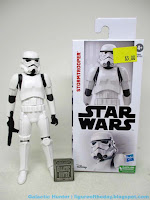 Commentary: I wanted to say much nicer things about this Stormtrooper, but it's good-not-great. But it's $5. It's a 6-inch figure with four points of articulation - the shoulders, the neck, and the waist. It also is a smidgen shorter than The Black Series Stormtroopers at a mere5 3/4-inches - but it's $5. Given that Hasbro charges us $12 for a 5-jointed 3 3/4-inch figure and $25 for a 6-inch collector figure, I think it's worth noting the massive chasm between these kinds of products, and just how far away we've gotten from collecting toys. This is a toy - the stuff we usually collect is priced to make the best mass-market product you can make to pry money out of adult fan wallets. While some of these cheaper 6-inch figures do lack articulation and some paint, again, they're $5. I've had my old Wilton 1983 Stormtrooper and Darth Vader cake toppers on my desk for a while now, and this figure is better than that. 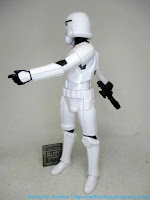 If you're a customizer, it seems pretty easy to fix this one up a bit. The deco needs a little help - while Hasbro did paint the front and back of the neck, they left the back of the elbows and knees unpainted. You might want to customize that. A few applications on the helmet were also left blank, but I (foolishly?) think you can probably touch these up with some sort of fine paint marker if your hands are steadier than mine. All in all, the figure's paint job is about as good as the vintage Kenner Stormtrooper, and if Hasbro made this exact sculpt with this exact paint at 3 3/4-inches tall and the exact same price, I would run out and buy 50 of them. I'll never army build at $15 - but $5? I can afford to army build at $5.

I noticed the blaster - molded to the hand - is an original trilogy-style pre-Disney one, lacking that extra scope we started seeing around Rogue One. This lead me to assume they probably reused the Titan Hero Series 12-inch size figure sculpt, but they didn't - this is new. The chest greeblies are all different, the pose is different too. The arms are a bit more natural, the legs are a smidgen further apart, and the end result is a perfectly good Stormtrooper figure. 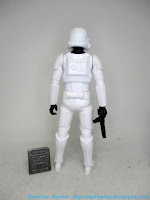 Hasbro will never do it, but I'd love to see them make a 3 3/4-inch bagged and cheap figure line like Hasbro did for Marvel in 2019 (Spider-Man, Hulk, Black Panther were great, Iron Man, Thor, and Captain America were also available. This "cheap" format doesn't work for every character - but it would absolutely work for Darth Vader, C-3PO, Stormtroopers, and probably Inquisitors and some other odds and ends. But I digress. For what this figure is, and what it costs, I can recommend it as a great toy for a kid or as an ideal at-the-office toy because at $5, it's less heartbreaking if it gets stolen. I love this entire line of figures - warts and all - because it's only 19 figures after 7 years, and the only one I still can't find is Chewbacca. It's cheap and fun, and not overwhelming - and as far as I know (not counting packaging variants) there's only one major deco variant, and that's a C-3PO I'll show here soon.

If you find one, I'd say buy it - give it a try. You might feel inclined to touch up the paint a tiny bit, but for $5 I think it's one of the most satisfying purchases I've made of a Hasbro product in recent memory. I don't get to say this a lot, but you absolutely get your money's worth here. "Wah that looks like a fast food Happy Meal toy!" some of you may say. And to you I say "I doubt you've seen anything remotely this good in years."

Collector's Notes: I got mine from Five Below. This figure comes in a new assortment (F5823 started with plastic-free packaging in 2022, B3946 was the previous assortment form 2015-2022, which sometimes had an open tray or open window, and sometimes had a plastic sheet.)

Perfect for army building. I did this with the new order troopers. I'd like to do the same with these!