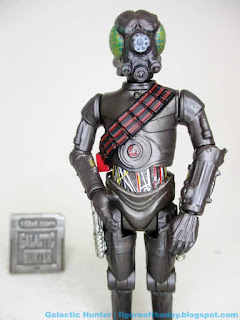 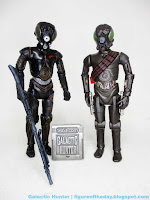 Commentary: Sometimes you see a figure and think you know what to expect - and oh, how you are wrong. 1-JAC defies expectations. Since Disney already had a great 4-LOM [FOTD #2,835] two years ago, I thought we would just be getting that droid again with new blasters, new paint, and a bandolier. Simple! But no - Disney made an entirely new mold, and this time, the heads don't really swap easily. The limbs aren't a perfect fit either. I have no answer why Disney would make a completely new figure over just adding accessories to an existing mold, other than it must have been cheaper. 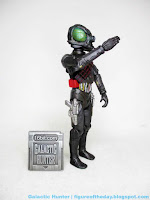 Compared to 4-LOM figures, this figure is about half a head shorter, with a more detail head and a less detailed body. The blasters are molded to the legs, and the hands are new sculpts that can't hold accessories anyway. To go through that level of effort I have to assume someone at Disney said "we don't want droids shooting people" or something like that, which is just a guess on my part. If Hasbro did this, fans would burn them at the stake, but for some reason Disney gets a lot more latitude. Maybe it's because it's a "it's this or nothing," and while it is better than nothing, it is not very good. It's not as good as Hasbro items, and it's not as good as the last Disney product with similar features - but the sculpting on the head is nice, and it looks fine standing in a box. The articulation is nothing special, with some of the softest sculpted detail on droid knees that you've ever seen. It looks almost unfinished - but again, if it's this or nothing, this is is a better choice. 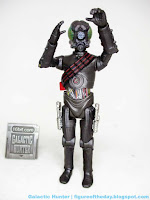 He has no problems sitting, and mine stands without any fuss. It's not like other figures where you have to work to find a "sweet spot," it's pretty easy to center everything and plop him on a table. If you need someone to look cool, this looks cool - the wires on the belly are nicely sculpted and painted, and the compound bug eyes are superb. I love the "facial" greebles, and the bandolier is excellent. It's just the actual droid body seems like it could have used another few weeks under the virtual sculpting knife.

Since I skipped The Black Series one, I'm happy this got made - but it could have been better, and I bet Hasbro doing it as a remold of an older figure would still be better than this. Given how few 3 3/4-inch The Vintage Collection droids get made, I have to wonder if Disney has unofficially taken over that segment of the line - but nobody really talks it up much so we'll never know if there's a directive there. It's not like we're getting much for Obi-Wan Kenobi anyway, but it is peculiar that The Rise of Skywalker got a better droid line than alien/human/main character line, isn't it? This set is pretty good for the price, but I wouldn't say it's essential. I will say that 1-JAC does look pretty nicely scaled next to the Retro Kenner guys, though.

Collector's Notes: I got mine from my pal Greg. Thanks, Greg!