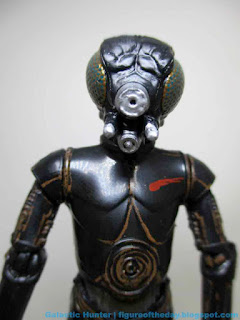 4-LOM Disney Parks Exclusive
Star Wars Droid Depot
Item No.: ???
Manufacturer: Disney?
Number: n/a
Includes: Blaster
Action Feature: Comes apart
Retail: $12.99
Availability: October 2020
Appearances: The Empire Strikes Back
Bio: All different types of droids populate the galaxy. Each droid is different and has their own unique personality and colors. A rusty droid with insectile features, 4-LOM was originally a protocol droid, but logic glitches allowed him to escape his programming and become a bounty hunter. That proved a perfect occupation. (Taken from the figure's packaging.) 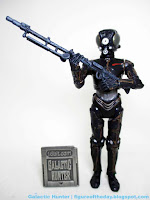 Commentary: Since Star Wars as a toy line has been around for about 43 action figure-filled years - plus or minus 1986-1994, depending on where you lived - it is not wholly surprising we're seeing reruns. The last 4-LOM figure from this size was from Hasbro in 2010 (and that was a convention exclusive, prior to that was 2007.) That means the last time a kid could walk into a store somewhere in the USA and see this droid may have been born around 2003, or maybe 2004, meaning no kid under 18 has likely had a crack at 4-LOM in a store at a decent price. It's very easy to forget just how much time has passed, and why Disney would want to take its build-a-droid tooling and whip out something kids, fans, and collectors might recognize and want to buy. Also, it's good.

Due to lighting and dubious reference photos, a lot of figures which we previously bought as "definitive" are being revisited on the regular. This figure is more in line with rcent figures from the likes of Sideshow, which is a departure from Hasbro's and Gentle Giant's older takes on the figure. (It's also a bit different than The Black Series figure, which has more silver on its head.) Which is right? Heck if I know anymore. This is the whole "Han's jacket is blue! No brown! No black!" thing, but it's getting spread over more and more characters. I can't tell you if it's true to the movie anymore - but I can tell you that the figure looks good, and is sufficiently different from all of Hasbro's 3 3/4-inch offerings to make it worth your while. 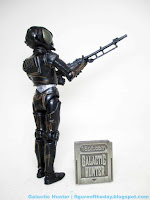 The basic build-a-droid body is more or less black, with less rusty than Hasbro's releases. It's subtle and restrained, so it stands out more - I dare say it looks a lot better. Part of the figure seem slightly glossy, and the big compound eyes look better on this figure than on any Hasbro release in this size. The gold "mesh" over the green looks gorgeous, with tons of tiny, hard-to-properly-paint applications showing just how far we've come since the last time one of these was in stores. (Hasbro more or less nailed it - with clear green, as a bonus - for the 6-inch figure a few years ago.) Disney 4-LOM has no problems sitting or standing. You can pose him, and tear off his limbs.

I was kind of beating myself up for paying around $20 for one of these on eBay, but it's not bad. ($13, + tax, + shipping, + my not going to a theme park.) I would be furious if it were $20 at Target, but $20 delivered to my door seems reasonable for a figure that seems sufficiently different and like a big improvement. This will likely be your go-to 4-LOM, replacing all your Hasbro figures that aren't intentionally done in the incorrect Kenner deco. You don't necessarily need it, but for those of you wanting something new, or shiny, or possibly the very best, I assume the specially painted rust lines, the red swoosh, the glossy plastic, and the obscenely intricate eyes will be enough to push you over the edge. Hasbro's does have better shoulder joints, but I'm also at a point where a good figure is a good figure is a good figure. If it looked this good and had 5 joints, I'd be happy, but to be effectively what would be two joints short of super articulated is good enough for me.

Collector's Notes: I got this from eBay.

problem is, the shoulder joints are necessary to get many good poses with the rifle. so it's kind of a wash for me between this figure and the hasbro one.