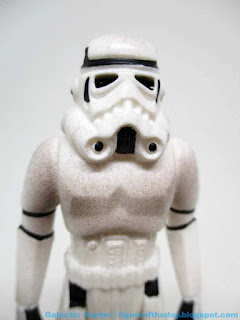 Bio: A remnant of the fallen Galactic Empire led by Moff Gideon was active in the galaxy's Outer Rim Territories during the time of the New Republic. (Stolen from Wookieepedia. Packaging has no bio.) 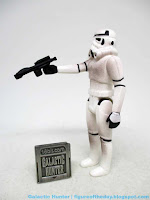 Commentary: The Remnant Stormtrooper is a completely brilliant idea for a retail release! But it wasn't one - this awesome army builder was originally shared between Hasbro Pulse and Shop Disney as an exclusive pack-in to a more expensive Monopoly game. Later, it was opened up to Entertainment Earth and other stores which do not pay my salary.

If you got the Stormtrooper [FOTD #2,621] from Target or Entertainment Earth a few years ago, it's the same basic figure, but it looks like it has some mildew on it. This is probably not how Kenner would have done battle damage in the 1980s, but there's also no precedent. Ships of that era just had stickers you applied, and figures were largely just clean. Jabba the Hutt had some spray on him, and this figure's damage is sort of like that. Is it worth $50 for a $10 figure and some paint (and a game?) Probably not. But I really like the Kenner style and wanted the official release, so I bought it. 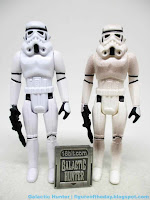 Articulation is same as the 2019 (and 1978-1985) release, with arms you can swivel forward and legs you can swing forward. He can stand fairly well and sit just fine. He has some difficulty gripping his blaster, but some of the older Kenner figures do. (I just pulled out my Thall Joben and Kea Moll and they can't hold theirs to save their lives.) The Stormtrooper can hold it somewhat acceptably, but I may boil some water to see if I can make the fingers better than they presently are.

If you wanted a retro Stormtrooper, this is one. This is probably a "completists only" release given its high original price and somewhat absurd secondary market price (people were paying $90 for the figure when the game with the figure still sold for $50), and I hope Hasbro considers releasing it alone or in a multi-pack. I'd love to buy a few of this guy, but at $50 a whack I'm just not interested in owning more than one. For the Kenner loyalist, you owe it to yourself to get this one. But if you're not crazy, save your money.

Collector's Notes: I got mine from Hasbro Pulse (sold out as of my writing this) but supposedly still orderable at Entertainment Earth.