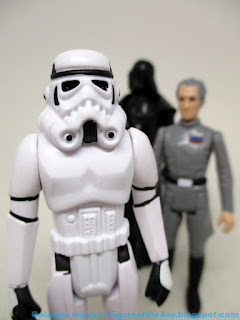 Bio: As members of the Stormtrooper Corps, an independent branch that operated under the Imperial Army, they served as frontline assault forces and formed the backbone of the Imperial Military.  (Stolen from Wookieepedia.  Packaging has no bio.) 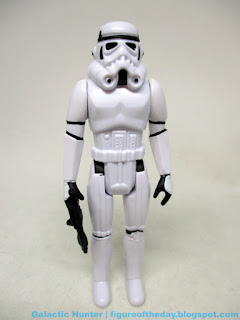 Commentary: With The Retro Collection, I'm getting updates of figures I have owned for decades - I really played with these as a kid!  So when something feels a little off, it sticks out - and this Stormtrooper is a bit off.  The basic figure is here, with its jointed shoulders and hips.  The hand grips the blaster rather loosely - and that was true of some of the originals - while the neck just plain doesn't exist. The helmet was fused to the chest.  It's white with  black paint - just like the original, and if you never open it I assume you will find it to be good enough.

For you olds out there, you'll feel some tactile problems.  The figure is a bit less glossy than the original.  It's a bit tougher to pose it to find his center of gravity - the 2019 release is prone to flopping over.  Also, the paint is a bit off.    The helmet is actually a bit better than the original figure, but the black on the wrists, elbows, and knees is just a bit off. The black doesn't cover quite the same spots, and what you're getting feels like a bootleg.  Admittedly, it's the very best bootleg, but it's still just not where it should be.  Some of the landmarks above the belt seem a smidgen off as well - the divots feel like they may not be precisely where I remember.  The front of the knees have a bit of black above the armor to show the body glove, which is interesting as some of the originals tend to lack that detail due to how they were painted back then.  Paint just couldn't make it there - so now it looks strange, even if it is arguably another improvement.

With painted wrists, it's possible Hasbro was trying to preemptively prevent yellowing in spots - but we won't know for sure until later.   The Stormtrooper is like someone speaking a language perfectly, but not natively - it's right, but it feels wrong.  The figure has traces of an accent while being technically flawless.  Most people will never notice, but linguists and super-duper picky collectors are going to notice.  If you didn't grow up with the originals, I would suspect you're going to like this figure with no reservations.  I doubt you'll find a better carded trooper anywhere near the price, and obviously I'm nitpicking because of my affection for the original.  He's still good.  He's just not an original.