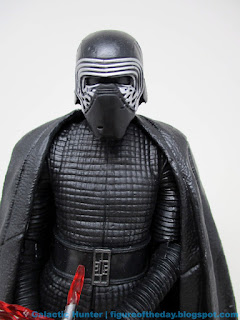 Bio:  The son of Han Solo and Leia Organa, Ben Solo was seduced by the dark side of the Force and renamed himself Kylo Ren, bcoming the First Order's champion and Supreme Leader Snoke's student. (Taken from the figure's packaging.) 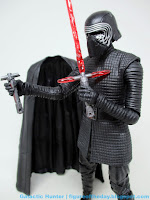 Commentary:  This is not an essential Kylo Ren figure.  While Rey, R2-D2, C-3PO, and Chewbacca all had unique bells and whistles to make you want to give them a second look, Kylo Ren is a step backward.   You could cobble one of these together using the head of the 2015 6-inch figure and the 2017 6-inch figure, just by giving the helmet to The Last Jedi release - and it might be better.

If you look at Kylo Ren #45 [FOTD #2,454] this is pretty much that figure with some problems.  Kylo Ren has the 2015 helmet with some divots created by the plastic insert - it doesn't look good.  His ankles are looser, which is bad for displaying - sturdy ankle joints are incredibly important for ensuring a figure doesn't topple over on your shelf.   The lightsaber hilt will not fit in or stay in the belt slot, at least on my sample.

On the bright side, the sculpt still looks good.  The simple paint job is still perfectly fine, and he can hold his accessories in his fists nicely.  I like the plastic cape which drapes over his shoulders nicely.  Since the figure is molded in black and has elbow joints with a marvelous range, it's a pretty good skeleton on which to build a figure.  With 26 points of articulation, it's totally fine but won't knock your socks off since you've probably got all the parts of this figure in your collection already. 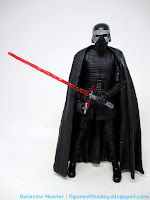 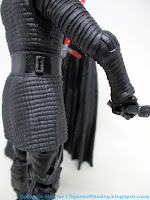 While you may wish to track down this set, this figure is not a worthwhile part of it.  Even if you're a Kylo completist, you'd be better served buying extreme-clearance Kylo Ren figures and cobbling together a similar one on your own.  This is a bad reissue, or a bad sample of a perfectly dull reissue.  I would advise getting a display stand with neck or waist support so he doesn't fall over, if your sample is anything like mine.