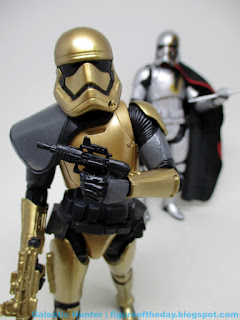 Bio:  A fearsome First Order stormtrooper officer, Commander Pyre stands out from the legions of identically equipped soldiers with his black-and-gold armor. (Taken from the figure's packaging.) 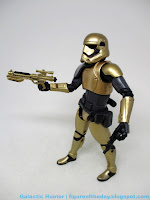 Commentary:  Much like the Mountain Trooper, I don't believe Commander Pyre appears in Galaxy's Edge as of yet - he's a fairly generic baddie in the Star Wars: Resistance with a clever design that makes use of existing assets.  Pyre is basically the 2015 Black Series First Order Stormtrooper [FOTD #2,162] which we've been given a few times over the years.  The plain white figure has received alternate helmets, pauldrons, and other new accessories todress up an otherwise nearly identical figure.   As far as I can tell, there are no new parts on this figure - the Trooper-with-a-pauldron was sold previously as the First Order Stormtrooper Officer [FOTD #2,248], a 2015 Amazon exclusive.   So why buy this one?

It's gold.  It's also the reason to buy this set.  Hasbro could have easily sold this figure in its basic assortments or as a store exclusive, but for the time being it's a bit of a mystery why it wound up at a theme park without yet seeing it as a costumed character or as a known element of a ride.  Maybe it is!  We just don't know yet. 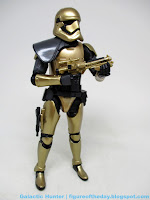 Since we haven't seen a "real" Pyre suit yet, we can only assume this is accurate.  It seems the dark elements on the arms and waist run a bit darker than a cartoon, but it could just be the lighting in the animation.  The layout matches the 3 3/4-inch figure, meaning that it's a gold Stormtrooper.  There's not a lot special here other than a black small blaster, a gold big blaster, and a pauldron.  I appreciate one change, though - the gloves.  I find the normal white trooper's partially white fingers weird and distracting, this figure has grey backs of the hands and black fingers for a more "classic" look.

As sets go, the First Order one is not the most interesting, but at least you get a trooper in C-3PO drag.  That's new - I don't believe we've ever had any sort of gold trooper figure before.   What is also interesting is that the figure was altered from the early test shots - Hasbro's first production had an all-black rifle.  This one has gold highlights.  I appreciate the change.   If you like this figure, go ahead and grab one - he's neat and I don't assume we'll see him outside Disney very much.