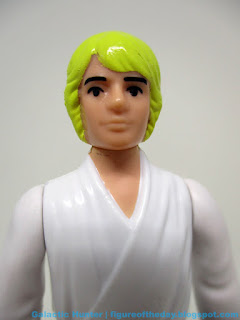 Bio: Luke Skywalker, a Force-sensitive human male, was a legendary Jedi Master who fought in the Galactic Civil War during the reign of the Galactic Empire. Along with his companions, Princess Leia Organa and Captain Han Solo, Skywalker served on the side of the Alliance to Restore the Republic—an organization committed to the downfall of Emperor Palpatine and the restoration of democracy. Following the war, Skywalker became a living legend, and was remembered as one of the greatest Jedi in galactic history.  (Stolen from Wookieepedia.  Packaging has no bio.) 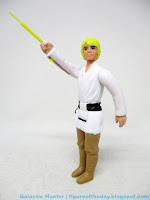 Commentary: Since I was born after the original film, getting the original Star Wars action figures were impossible by the time of Return of the Jedi.  You could get a Vader, but the original Luke Skywalker wasn't at Toys by Roy or Long's Drugs or Lionel PlayWorld anymore.  I went bonkers when I saw him in the J.C. Penney catalog and treasured him. And then our neighbors broke the lightsaber. Thanks, Julie. It's still broken.

Luke had been rereleased in 1995 as a shorter, cast-from-the-figure release that was a pretty good take on the original with a head that seemed a bit smaller and colors that were a little paler.  This new 2019 edition has eyes that are set a little wider apart and he's a smidgen shorter.  It's the yellow hair variant, and the "shorts" are painted white rather than being molded in white plastic - all the ones I've owned were molded in white plastic with brown paint.  This kind of variant existed on tons of vintage figures, but it's an easy way for me to see this new release as a little different.   Most of the rest of the figure is pretty close to the original, with slightly-off paint apps on the hands, the black belt, and the classic "broken"  hand that you might be able to grip a blaster despite not being designed to do so. 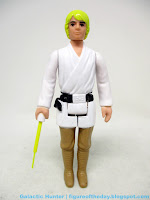 It's a pretty remarkable design when you think about it - Luke's telescoping lightsaber was barely glimpsed at in the movie and a blaster or other accessory would have made just as much if not more sense.  This future-proofed Luke by making a figure that lives in adventures after the original film, rather than limiting it to specific scenes in the movie.  As a piece of history, this Luke design was a stand-in for the actual movie for millions of kids.  In 1977, you couldn't own the movie - maybe some comics, or a novel, or Super 8 clips.  You had to reenact things yourself in most cases, and that's what made the old toys extra special and resulted in four decades of obsessing over them.   If the price is right, I'd recommend it.