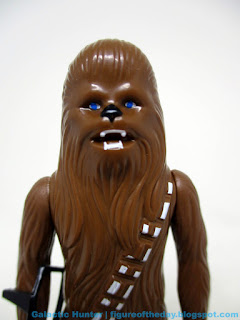 Bio: Chewbacca, known affectionately to his friends as Chewie, was a Wookiee warrior, smuggler, and resistance fighter who fought in the Clone Wars, the Galactic Civil War, and the conflict between the First Order and the Resistance. He hailed from the planet Kashyyyk and became a Wookiee military leader.  (Stolen from Wookieepedia.  Packaging has no bio.)

Commentary: My first Star Wars action figures were C-3PO and Chewbacca, so that was the first one I cracked open from this new old assortment.  It started life at Target, but then Entertainment Earth offered them - and sold out in a few days.  It was fast.   Anyway, this is Hasbro (and Kenner) reissuing the figure a second time.  The 1995 Toys R Us exclusive reissue was reportedly made in quantities north of 250,000 - I have no confirmation of this - and it was a shorter figure case in a very different shade of brown.  The 2019 reissue is the right color, shorter than the 1978 edition (but not that short), and pretty much  the kind of reissue you want.  The eyes are different, there's some generation loss from what I assume was a 3-D scan from Gentle Giant, and the seemingly intentional off-center bandolier printing is off-center and uglier in a more unpleasant way than all the original Chewbacca figures I have seen over the years. 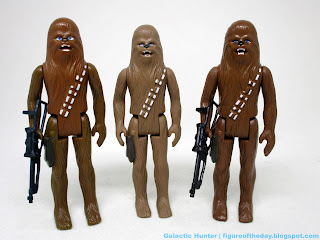 As with before, the figure can stand up properly (not true of the 1995 edition) and the bowcaster slides on his arm without any real fuss.   He now stands about 4 1/8-inches tall - down about 1/8-inch from the original - but he stands just fine, and sit without a problem, and at a quick glance is colored properly when compared to the originals.

The figure has most of the flaws of the original - the head can't turn, his hand can't actually grip his weapon, and the paint job is pretty simple.  It's peak 1970s toy simplicity, and unlike so many modern figures it just plain works.  The bowcaster can clip to his arm.  He can fit in the cockpit of the Millennium Falcon and just about every 3 3/4-inch scale vehicle.   It's not a 1978 original, but that's ideal - it's just different enough, complete with new copyright markings under the butt on the legs.   I would say it's a reissue done right because I do need those little differences to be happy, but you may disagree.  For the asking price, it's worth owning if you don't have and want the original style of figure.

Nice review. Still hate that nonsensical "bowcaster", obviously made looking at a side view of the prop and losing the actual "bow". Even as a kid I knew to stick a bent piece of plastic something in there to make it look more right. Would not have minded if they corrected that.