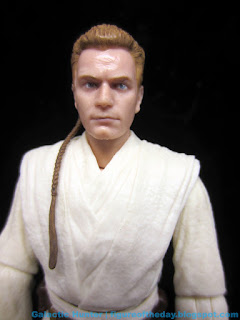 Bio: Like all Jedi of his era, Obi-Wan Kenobi was raised in the Jedi Temple from a very young age.  He first underwent training with Yoda, before being assigned to Jedi Master Qui-Gon Jinn in his teens. (Taken from the figure's packaging.) 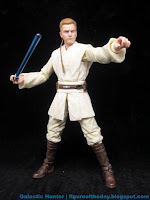 Commentary:  "But is it really Star Wars?" has been something echoing around my head as of late - and the answer is, of course, yes.  Having grown up mostly in a world when there were 5 Star Wars movies and everybody hated Ewoks, I did not have the reaction of horror when we saw the movie in which Ewan McGregor portrayed Obi-Wan Kenobi for the first time.  I'd already been in a world where Wilford Brimley yelled at a small blonde girl and a magic Ewok knocked out a spider with magic.   A little boy in a race car and the bizarre salamander didn't immediately send me into convulsions, although I will say it was really hard to live through a Q&A column where most of the submissions were less of love and fandom and more about return on investment for some of the most-collected toys in history.  But I digress.   Hasbro's sense memory of the blowback to The Phantom Menace have kept Episode I figures in short supply over most of the past 18 years, primarily keeping it down to droids, a couple Jedi, and Darth Maul.  I get it.  The good news is that the kids of that era are old now, and as such they're into 6-inch figures aimed at the nostalgic impulse. 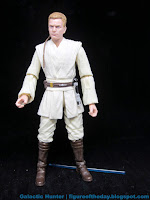 Darth Maul came out in this size in 2013, nearly perfect.   Qui-Gon came out not too long ago and he was great - and Hasbro seems to find new, small improvements in deco every few years.  Obi-Wan Kenobi takes full advantage of the 2018 advancement of "hyper real face paint," which digitally squirts the 2D portrait over a 3D face.  The results are usually very good, changing what could have been a rich man's 3 3/4-inch figure into a poor man's Hot Toys 1:6 figure.  Obviously these are not the same as a $200 figure, but it's definitely a massive generational improvement over what many of us had as kids.   Obi-Ewan has glossy lips, bight eyes, wonderful eyebrows, and a playful hint of a smirk on his face.  The padawan braid rat tail hangs off his head nicely, thin but not fragile, able to bend slightly for pose purposes.  Other than a little excess dark paint in the grooves of his hair, the head is perfect and the costume is very good.

Obi-Wan sadly lacks the alternate left hand of the prototype or any Jedi robes, and there's also no communicator to be had here.  The costume itself doesn't seem to leave anything on the table, with rich fabric sculpting in the plastic that's gorgeous.  The "skirt" is slit in three places, allowing the semi-pliable plastic a little more give when it comes to posing him in your desk-based Jedi battles.  It also shows just how much room for improvement there is over the first Obi-Wan figure from The Black Series, sadly having a portrait that could use some improvements.  I would also have liked Hasbro to have painted the soles of Obi-Wan's boots a different color, but I can't imagine most fans will either notice or care.  It's just that I'd like a little more in the box, particularly given how little paint is on his body and how little gear comes with this figure.

Obi-Wan does what he does well.  I don't feel there's much room to do better here, and Hasbro deserves all the pats on the back for spending 20 years to get all the little details more or less just right.  Get this one unless you're allergic to prequels.