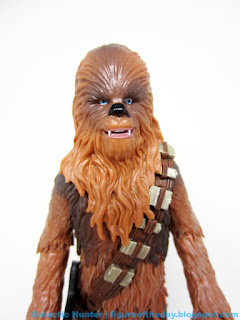 Bio: A legendary Wookiee warrior and Han Solo's co-pilot aboard the Millennium Falcon, Chewbacca was part of a core group of rebels who restored freedom to the galaxy. (Taken from the figure's packaging.) 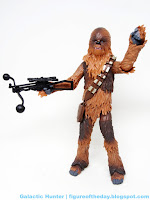 Commentary:  Celebrating 24 years of me writing about Star Wars toys on the internet as of today!  I've wasted my life! Let's get started.

Chewbacca has less new to offer than Rey in this Galaxy's Edge set.   This is a redeco of The Black Series Chewbacca from 2015, and odds are you won't even recognize it as different.  The body was originally used for the previous Chewbacca figure, and it's not like Chewies are all that different.  If you have the 2015 red box figure, you've basically got this one.  The head on that figure was unique - so if you don't have that figure, this version is slightly better. 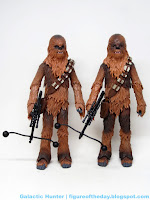 The figure itself is still very tall and nicely detailed, with a wonderful shaggy head and hair hanging off the body.  Chewbacca has about 24 joints, depending on how you feel like counting.  The added torso segments aren't super useful joints, and I didn't count the ankle joints since the hair prevents their movement.  The large Wookiee has no problems standing, but that hair isn't going to let him sit in any hypothetical future playsets or vehicles without modification.

The fur deco is where the figure is barely different.  The 2015 release has dark brown paint around the eyes, while this one has darker brown paint and barely lighter brown plastic. The paint is largely where it was before, but the head is where you'll notice distinctive changes - just check out the photo.  Other than that, this is basically a repack of no real consequence.  If you want a Chewbacca, it's good.  If you're a variant nut, it's "different."  But at least Rey gave you an amazing new paint job on the face - this just changes where the dark splotches go.  Skip it unless you're a completist and bought the set for the other figures, or if you're someone that just needs a Chewbacca.  It's fine, just redundant if you're complete already.