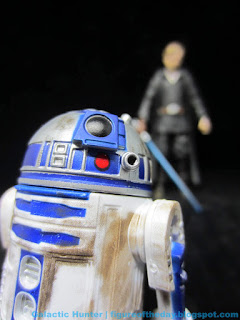 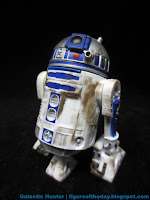 Commentary: There are times Hasbro gives us something great, and there are times where we get something that's somewhat insulting.  This R2-D2 is not one of Hasbro's finest hours.  What's particularly interesting is that this is the same mold (but not deco) as the R2-D2 in the Force Link 2.0 2-pack with C-3PO... and it costs more. And comes with less.  And hasn't corrected the major decoration problems.  What's funny is I opened this figure and was immediately disappointed, then I went to look at Amazon for the link above... and their reviews were disappointed, but mostly due to how it shipped and not the figure itself.

The body is effectively the "build-a-droid" body we've been getting over the last decade.  R2-D2's dome once more has the "bald spot" on top of his dome - it should be blue, this one is silver.  The figure is on the vintage cardback - the selling point, and Hasbro knows it, given that they've not released this retro-style package over the whopping fifteen years run of The Vintage Collection.   R2-D2 also is missing some blue detail at the bottom of his left-hand side of his can, a few dome details are left undecorated, and the central eye is matte instead of glossy.  It should be - and usually is - glossy. 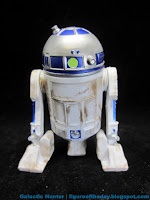 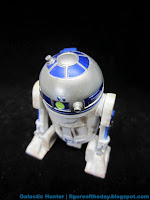 Over the years Hasbro has often released a figure on both vintage and non-vintage packaging at the same time, giving the vintage one a premium price with fewer accessories.  (Qui-Gon Jinn in 2012 is an egregious example, as were a few Saga Legends repacks with stands and a big box of bonus guns at a discounted price in 2010-2012.)  Hasbro knows fans will pay extra for vintage packaging, regardless of the fact of the figure warranting the higher price or even being a good match for the photo.  By dropping the dirt deco and adding that one blue cap on the dome, I'd say this would be adequate.  As it stands I don't exactly feel like I got my money's worth here.  Packaging fans, I think you'll like this - it's fine if you don't open it.  If you've got over 40 different R2-D2s by now, you're probably not exactly thrilled that this new one is more expensive, does less, and hasn't made any real improvements.  I don't recommend this unless you're a packaging fiend or a completist.

Curious if you spelled it Artoo-DEETOO (as opposed to Artoo-Detoo like the package says) because the droid's suffix was DEETOO in the old novelization and other early sources. It might just be a typo, but I wondered. Thanks for this and thousands of other reviews.