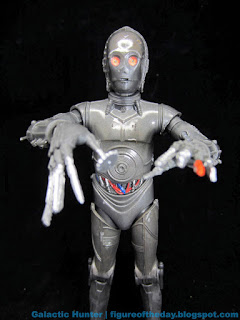 Bio: Activated by Doctor Aphra, 0-0-0 (Triple Zero) is a droid programmed for etiquette, protocol, and translations, but also specializes in interrogation and torture.  With his fluency in a droid language unique to the Tarkin Initiative labs, the dark silver-plated droid reactivates an assassin astromech droid, BT-1. (Taken from the figure's packaging.) 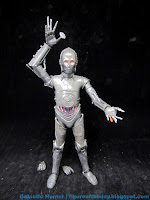 Commentary:  A repaint with a little more. 0-0-0 gives you three times nothing, which it turns out is actually something.  If you've been collecting for a while you'll recognize C-3PO's basic build, which was upgraded with working hands and elbows for the release as 4-LOM, and those parts have been integrated here to give you a super-articulated torture droid.  The hands can pop off and be swapped with ones featuring various blades and needles to maximize your creepiness.

The head and just about every detail match C-3PO, which was what provided the basis of the comic character.   "Black repaint" is sort of common when it comes to toy robots, so it's nice Hasbro made it interesting by adding red eyes, elbows, and a lot of silver chips. 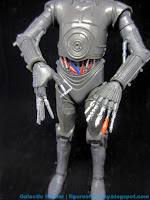 The figure's most striking feature are the new hands.  Not only do you have hands that can grip weapons, but you have ones with crazy tools in each finger.  For safety reasons they're rubbery, but the buffet of options is quite lovely.  There's a power saw in the thumb as well as gougers, pokers, scrapers, and other things that you probably won't enjoy.   The detail in the fingers is pretty amazing given the size of each digit, so kudos to Hasbro or Disney or whoever does the sculpting these days.

I haven't seen many of these in the wild, but it's a droid.  Of course I'm going to recommend that you buy it.