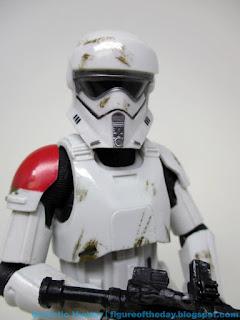 Bio:  Like all First Order Stormtroopers, specialized units of Batuu Mountain Troopers are trained from birth, growing up with unit designations instead of names and fed a steady diet of First Order propaganda to ensure absolute loyalty. (Taken from the figure's packaging.) 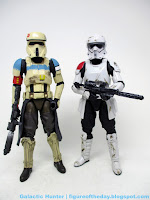 Commentary:  I haven't found any photographs of the Mountain Trooper as a real-world, in-park or in-movie entity.  I've seen this action figure, and search engines don't seem to yield actual costumes.  That makes this something of an oddity - is it legit?  Is it necessary?  While Kylo Ren is in movies and Commander Pyre is on a TV show you aren't watching, the Mountain Trooper is something of a mystery - right now, he's just an action figure.  And a derivative one at that.

At first glance I thought it was a new figure, but the Mountain Trooper is a retool of the Scarif Stormtrooper Squad Leader [FOTD #2,350].  The feet bear the item number of its ancestor, B9801, and it shares the waist and thighs of the Scarif trooper too.    The hands seem to be the same, but everything else is new - the chest, the helmet, the arms, the boots, and the kama/skirt are all new.  Its articulation is identical, and I believe the blaster is new and pretty good too.

It's an oddity as it combines late Empire parts with First Order elements.  The red shoulder recalls the Sandtroopers, the helmet has the Scarif visor and a mouth/face that looks a lot like the Biker Scout/Scarif Trooper with a line across the face that looks like a standard issue Stormtrooper mouth.  The back of the figure has a decent First Order look, with the "O" you'll recognize as a recurring element on the back of First Order TIE Pilots and Stormtroopers. 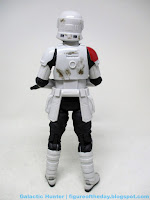 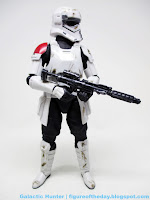 Unless this shows up somewhere, it's a deleted scene/concept figure.  I think it was kind of cruddy to make a figure that doesn't appear anywhere that takes elements from the Empire and throws on some new First Order bits without there being some story reason for it.   It's a figure you can add to your army, and arguably it's not all Empire or First Order, but you could put it with either and probably not love it.  The sculpt is great, but it's busy and I just generally don't love it.   Merch for merch's sake - especially when new tooling is involved - is kind of upsetting when we could have had something from the movie, or the park, or even from Resistance instead.

I'm thinking this trooper will show up in the Rise of the Resistance attraction when it finally opens...

That would make sense, surely Disney don't expect people to be jumping to buy the set purely for the Kylo figure!