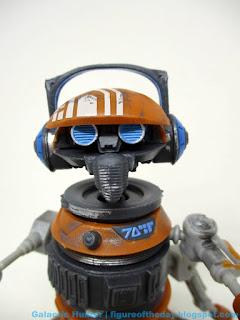 Bio:  RX-24 more commonlyknown as Rex, has given up the pilot's life and has reimagined himself as DJ R3X.   Behind his DJ table, he spins and plays upbeat music as he watches over the crowd of the cantina. (Taken from the figure's packaging.) 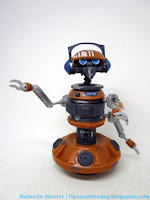 Commentary:  I dragged my feet on DJ R3X.  It's a good figure but it didn't push my buttons, probably in part because I haven't been to the park to see the character.  The new mold is a pretty great metaphor for the Disney stewardship of Star Wars - it's the skeleton of the old thing you liked with a new coat of paint and some added bells and whistles.  The silhouette of the original is there, the original voice actor is also there, but it changed.  Disney could just as easily have left classic Rex in there as a DJ and probably would've sold just as many figures - if not more - thanks to the potent poison of nostalgia.   There's a hint of AC-38, more than a bit of Old Rex, but it's a new thing with giant headphones and raver goggles, plus a new mouth microphone piece over the original speaker.   It's more. It's extremer.  It might be good enough, or it might be insultingly different - that's on you.

If you like the design, it's a good figure. The head telescopes - or periscopes? - up and down.  Each arm is on a body part that can swivel around the central pole of the body, and each arm has multiple points of articulation.  Unless I missed some, you're looking at about 18 joints including elbows, rotating poles, claw thumbs, and more.  Thing is, it's not super helpful as the DJ has no turntables or machines with which to interact.  It's nice that they overdesigned this guy to make him wonderful, but like some other figures in this scale you have to wonder if they couldn't have saved a few bucks and considered functionality once it comes home with you. 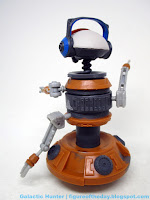 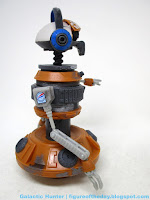 Deco is great.  You have this wonderful orange with grey, tons of scuffing, blue eyes, and a white helmet - it's very Star Warsy.  There's something odd about the orange, but it works - it feels like an old, used, and theoretically a used real piece of music equipment in a bar somewhere.  It feels legit, but it somehow doesn't belong with the rest of my The Black Series figures - everybody else feels like a degree off from a movie design, while this one seems just a bit more off.  It's good, it's close, but it feels like we missed a step or two in the stages of droid evolution somehow.    There's nothing wrong with it, it's about 4-inches tall, and as an exclusive mold you're probably in the market for one.  But the rest of the set was a bit more exciting for me, and I already had all those characters.