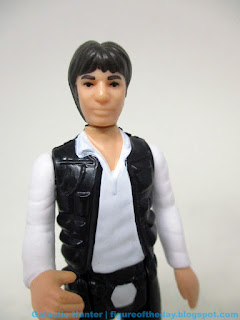 Bio: Han Solo hailed from Corellia and became a smuggler in the employ of Jabba the Hutt, even completing the Kessel Run in just twelve parsecs with his prized ship, the Millennium Falcon.  (Stolen from Wookieepedia.  Packaging has no bio.) 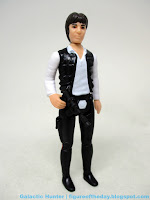 Commentary: I don't love this one.  It's close though. The Retro Collection gets it close to right, and the figure's look is one of the better, true-to-my-memory releases.  Sadly Han Solo seems to have gun grip problems, although your mileage may vary - mine holds the gun for about 5-20 seconds before it starts moving and falls on the ground.  It's a tight grip - perhaps a softer plastic on the hand would have helped?

Hasbro went with the big head variant, which was particularly tough to find on the original 12-back cards.  Since this doesn't have that nifty price tag square, it's possible Hasbro wasn't going for that look anyway.  Han is one of few Kenner figures with a bent elbow, the right arm allows him to stand or sit while casually aiming his gun from under the table at a cantina.  That's pretty nifty, and along with an open left hand it gives the figure a distinct personality.  His hair is more "Beatles" than "Han Solo," but it's distinctive enough that it got a lot of us through the 1970s and 1980s.  And 1990s.  Han heads have always been just a little bit off. 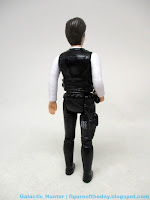 The figure does retain a lot of the costume's signature elements like the collared long-sleeve shirt, the black vest, the holster, and even the stripes on the pants.  His plastic isn't as glossy as some of the originals, but the colors are basically all there - it's a simple figure with only five total colors across the whole darn thing.     Presumably as a nod to the original, the figure's flesh hands are painted with part of the wrist left black - this was a recurring issue on old Kenner toys.  During The Empire Strikes Back, a number of figures were made with flesh paint spilling over on the sleeves!

Han has no problems standing or sitting, and will be right at home inside any of your 1970s and 1980s (and 1990s) vehicles.   I wish he could hold the gun better - but it might just be my sample.  Perhaps boiling water or clear rubber bands will solve my problem - it remains to be seen how yours will turn out.  It's a good remake of a classic figure, although I kind of which teams Lucasfilm and Hasbro would have made new, vintage-style figures.  Luke could have a "snap-on" lightsaber.  Han could have two straight arms.  If you're going to make all-new molds, changing the figures in some way so nobody gets confused would be a nice benefit given the high price of molds, but such is life.  If you can find Han at a price you can live with, I'd recommend him.