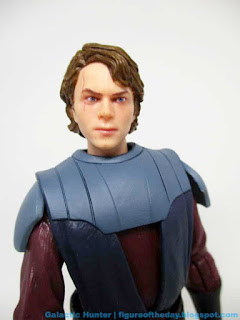 Bio: Anakin Skywalker was a legendary human male Jedi Knight of the Galactic Republic and the prophesied Chosen One of the Jedi Order, destined to bring balance to the Force. (Taken from Wookieepedia. Package has no bio.) 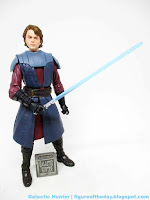 Commentary: The retooled Anakin Skywalker took the Attack of the Clones mold and made some neat modifications while slapping it on an upsized 2008-style cardback. This figure seemed to come and go immediately, and I hope more are on the way - you're going to want one of these. It's really cool.

Our Jedi hero uses elements of the arms and legs from the previously released Attack of the Clones Jedi Anakin with a great new head, new armor, a new torso, and some new hands. And I think a new shoulder. The lightsaber sort of awkwardly plugs in the belt, and the construction is a little strange. If you collected Masters of the Universe Classics - which frequently had a soft rubber shell over a body - it's like that. It's a little bulky and awkward, but it still looks decent enough and gives you the Darth Vader-like silhouette (sans cape) you need and want. 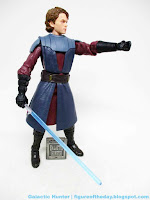 Since I'm a fan of the TV shows - the ones that aren't Resistance - I'm pleased that this figure turned out well. The elbows are cut fairly well, bending slightly more than 90 degrees with bend-and-swivel wrists and those fancy shoulders that can pivot forward a bit. You can get some decent double-handed lightsaber poses, and the clamshell robes block some robe movement - but since they had some cloth and strategic vinyl cutting, you can still squeeze a few decent duel poses out of this one. The rubbery skirt has a decent amount of flex to it, and the design seems to hit most of the key markers of the outfit from the cartoon. The belt has some nice gear, the gloves look right, and the face... well, the face is acceptable. It's not quite Hayden, and it's not quite as harsh and angular as the face on the show. It's very much Anakin but the eyes don't seem quite as dark, so it's a decent take on the character. It's also a little odd to see the figure walk the tightrope between live-action and a cartoon, resulting in something that will delight some fans and annoy others. I would have absolutely loved to see an upsized cartoon-style figure just once, but it might be bad to further splinter the various action figure lines with yet another style within a scale. 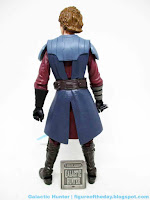 I love how his neck and head can pivot, and the costume's colors look like a semi-realistic take on the popular CG outfit. If this were a main line figure, you'd buy it. Heck, it's great, and I was thrilled to stumble on it at Target. This may be one of the very best Anakin figures we've had in this scale. It's also not from the movies, which you may see as a pro or a con. History seems to be favoring the cartoons over the prequels, and I can see why - there are great costumes, wonderful aliens, and most importantly, a heck of a lot more stories. I hope Hasbro releases more of this one - even in a different box - so you hopefully have a chance to easily get one. It's absolutely cool enough to justify spending a few bucks, but not overspending. There are too many figures to buy thees days to warrant a secondary market premium for most of them.

Collector's Notes: I got mine from Target. And I hope I can find Echo and Obi-Wan some day.