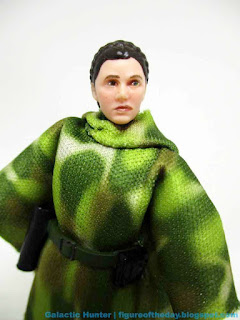 Bio: Leia Organa was a Force-sensitive human female political and military leader who served in the Alliance to Restore the Republic during the Imperial Era and the New Republic and Resistance in the subsequent New Republic Era. (Stolen from Wookieepedia. Packaging has no bio.) 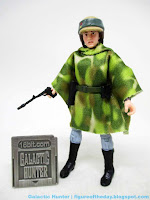 Commentary: As The Vintage Collection marches on, the line has outlived its inpiration. Princess Leia (Endor) is a revision of a figure from 2007, and while some fans bemoan her release 14 years after the debut, it's important to put it in context. The original Kenner Leia Endor Combat Poncho figure came out in 1984, and Kenner's POTF2 (or, the 1990s The Power of the Force series) hit stores in 1997 - 13 years later. In 1997, she didn't seem like it was a "too soon" thing and 13 years was considered an eternity as a generation of kids grew up with the movies in VHS and the toys in garage sales or flea markets. While a new mold would have been nice, it was absolutely time to bring her back.

The packaging is similar to the 1984 original (and 2007 The Vintage Collection release, with the figure's colors looking like a bit more of how you remember her in the movie. The 2021 package is in the somewhat ugly global packaging, where "4+" replaces "Ages 4 and up" and the SKU is replaced by a "50 Lucasfilm Ltd." graphic which I think you're supposed to like. On any modern design I think it would be a great flourish, but on something meant to mimic a 1984 release - one that has the helmet separated in a separate compartment, to boot - it seems like a misfire. The fact that they changed her name from "Princess Leia Organa in Combat Poncho" to "Princess Leia (Endor)" also is sort of a shrug. The photo was composited differently as well, and the faux chrome doesn't quite match the original. But that's to be expected. 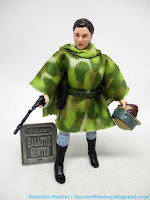 The figure is repainted, with things like her sleeves in a greener color and her head getting that photoreal makeover all the cool toys are getting. It's not bad - she looks a little less waxy and more lifelike, with more believable eyes and a hairline that's.... well, it's just as good. Some of the reissues got all-new heads with separately molded hair elements, but this was not one of them.

Her belt and holster is recolored in black (instead of brown) and her new helmet is smaller and fits her much better than the oversized reused piece from a few years ago. The blaster fits in her holster nicely, and the articulation is pretty good for 2007 but unremarkable for 2021. 20 points of articulation sounds like a lot, but other than her ankles, she's about as poseable as the Spin Master Batman and Jurassic Park humans in the same scale. And those are about eight bucks, and brand-new molds, often with more and bigger accessories.

While the helmet is a necessary improvement, the real reason to buy her is the poncho. It's brighter and greener, less muddy than the 2007 release. It looks more like how you remember her from the movie, and is a bit closer to the 1984 action figure. Even though Hasbro didn't make you an all-new head, this is a figure that's mostly about the helmet and poncho - and those are absolutely brought up to modern standards. If the opportunity presents itself, get this one. Especially if it's still $13 when you find it. Adjusted for inflation, if the figure were $4 in 1984 it would be about $11 today. The 2007 release was about $10 if memory serves, which puts it at $13.10. Granted, there's no tooling to pay off this time so it could be cheaper, but that's a whole different rant and I want to bid you good day.

In fact I believe her head is a new sculpt.