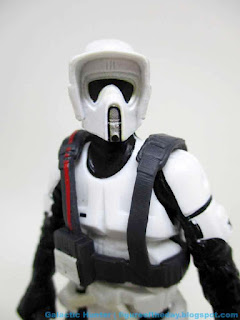 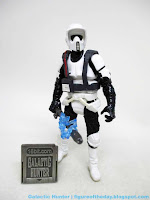 Commentary: In 1996, fans online were really upset and annoyed that the IG-88 figure Kenner put out was very similar to the 1980 toy, just with new deco, a waist joint, and a couple of minor tweaks. And that was about 16 years apart. The latest edition is this Scout Trooper, a trooper of Theseus, started live in 2007 as a super-articulated figure and this one is effectively a somewhat upgraded version of that figure (its 2012 rerelease, to be precise.) Now in 2021, that's only 14 years apart, but that's still kind of amazing. How many toys are kept in circulation with minimal changes for so long?

This is a pretty good super-articulated figure. The neck is jointed for maximum improvement riding his speeder bike, and the hips were upgraded in 2012 to allow for lateral movement for improved piloting of said vehicle. The arms, hands, and everything else are basically the same as the 2007 release in terms of functionality. You get about 25 points of articulation, plus a holster - but I should note, no blaster was included in this particular 2021 release. 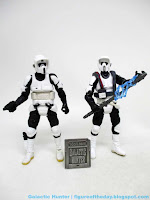 Deco is slightly different than other releases, as the forehead lines were dropped, the shoulders are white (not black) rings, and the soft belly portion is white rather than the dirty off-white color. Hasbro painted the soles of the boots too, which is a nice feature. The straps of the bags hanging off the belt are white this time, and you also get a whole new harness over the figure's chest. It's a lot like what Hasbro did to the 6-inch The Black Series figure - and since you can re-sell the same figure again, you can completely understand why they'd want to repeat the upgrade with the 3 3/4-inch figure line.

The packaging is great, but the main reason to buy this figure is the electropole with the energy effect. He has no problems carrying the weapon, and with the harness it almost looks like a new trooper. My standards for "new" are pretty low when it comes to army-builders, so something like a recolored shoulder or a dirt-free paint job just add to the fact they actually sculpted some new parts here. 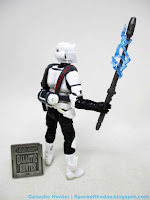 This item was developed to be a shared exclusive, so you'll probably find it at some online stores and distributors - but it won't be showing up at big box stores. I'd recommend getting it if you can find one at the right price. Is it worth $15? It's a bit of a pill to swallow at that price, but it's pretty well-done and it's not like there's a lot else to pick up in this scale right now. Maybe some day we'll get Cal Kestis in this scale too, but for now at least we have a couple of troopers. It's a start!