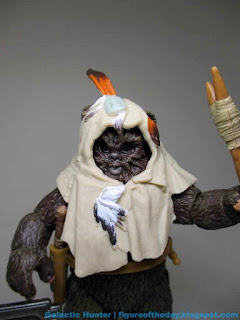 Bio: Paploo was a male Ewok of the Bright Tree tribe on the forest moon of Endor. During the Battle of Endor, Paploo aided the Rebel strike team that was led by Han Solo in destroying the generator powering the Death Star II's deflector shield. (Stolen from Wookieepedia. Packaging has no bio.) 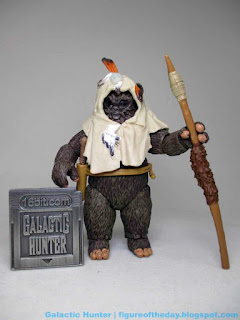 Commentary: I admit, I did not expect we would ever see a new Paploo but as Hasbro seems intent on remaking as much of The Vintage Collection as possible to ensure an analog with the original Kenner line, it makes sense. Many of thse figures are reruns with new heads or fixed paint jobs, but this is a weird one - we've had pretty good Paploo figures over the years. The 1984 figure - which was common as dirt here in Arizona in the late 1980s toy shows - provided some of the inspiration. The costume on the cardback doesn't really match the figure, and the headdress seems closer to what he wore in the movie. What surprised me is that despite tooling new parts, the head was just the 2012 Lumat head again... which means it's an improvement, with room for improvement.

This very same body has a ton of articulation and was previously used to make the likes of Logray and Teebo figures, to name a few. He stands, he has lateral hip joints, he even has elbows and wrists - which is amazing, considering most Ewoks had to be content with five points of articulation until the early 21st century. His staff appears to be new, and the headdress is also new - the big feather sticking up is a huge improvement, and the feathers are all painted quite nicely. There's a lot of color in the movie costume, and the hood here seems to capture that quasi-handmade feel that you want.

The fur color is mostly pretty good, but the face is a little dark and this seems like it could be a stopgap figure before another release comes later. The head has some lighter fur on it, some lighter skin on the lips and nose, plus visible teeth in the movie - this figure has incredibly dark eyes almost hidden by the dark fur, and the skin seems largely unpainted. I genuinely don't expect there to be another Paploo any time soon, and each modern version offers unique features that make it a compelling figure. With Ewoks as toys, the variant rereleases with different hoods or accessories are secretly fantastic for those of us who really like buying Ewoks so we can populate a shelf with lots of different-looking figures. 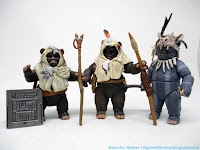 The staff seems to be entirely new with a very fluffy grip, and the knife slides nicely in the sheath on the belt. Hasbro did an excellent job picking good accessories (and making new ones) for their various Ewoks, and this Paploo is no exception. I just wish I liked the face more. For most fans it's going to be good enough - the hood overpowers the head inside the garment. On a shelf of figures, it'll never "pop." Being an older fan, I remember how the face of the original toy always seemed striking and even how some of the subsequent ones really had distinctive and often cute faces - even the weirdly worried 2009 The Legacy Collection figure is unforgettable. The costume is arguably more important than the face, but you get so much personality in these little furry faces that it's a shame they couldn't have given us a new head here. Especially given that the body is from 9 years ago.

This brings us to it still being the best Paploo in over a decade, with the best costume we've seen probably ever, and it's a good figure in its own right. If it was just sold as "Ewok" you'd go "Oh, that looks kind of like Paploo, neat, I want that." On its own merits as a little plastic man I totally love it and recommend it to the others who can't get enough of Endor's most popular non-Dulok citizens, but those wanting the absolute definitive Paploo-to-end-all-Paploos are still going to need to wait longer. If you can find one for $13, I'd say just grab it. I wouldn't count on interest in this kind of product to last long enough to necessarily warrant another lap around the Ewok track so this might be as good as it gets. (But if you have the 2009 figure and are happy with it - it being one-half of a two-pack of figures for $8 - you may not need to upgrade.)

Email ThisBlogThis!Share to TwitterShare to FacebookShare to Pinterest
Labels: Ewoks, Exclusives, Return of the Jedi, TVC