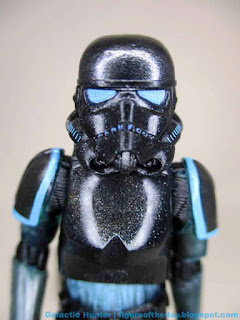 SHADOW STORMTROOPER (The Force Unleashed redux)
The Vintage Collection 3 3/4-Inch Action Figure
Item No.: No. F2710
Manufacturer: Hasbro
Number: #194
Includes: Blaster, rifle
Action Feature: n/a
Retail: $14.99
Availability: June 2021
Appearances: The Mandalorian
Bio: Shadow Troopers were a branch of Imperial shock troopers deployed during the Rise of the Empire era. These units were often either under the command of stormtrooper commanders, or the Emperor's Shadow Guard. They had many encounters with Galen Marek. (Stolen from Wookieepedia. There is no bio.) 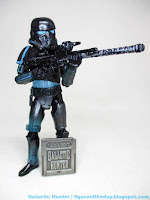 Commentary: Thanks to a churn of new fans and a taste for endless repaints, the non-canon status of the Shadow Stormtrooper from The Force Awakens games is an easy redeco that delights fans over and over. The two games from the series were rendered unnecessary by Rogue One, but they're still neat - and thanks to a massive marketing initiative with tons of merchandise, fans really stuck with it. Few games before - and none since - have enjoyed this level of Hasbro action figure tie-in product.

The excellent trooper redesign from The Mandalorian and Rogue One is used yet again - there are some minor sculpt differences from the classic movie designs, such as the pistol - and molded in clear blue and sparkly grey colors. This is unlike the other Shadow Stormtrooper, which is a black figure. For those keeping track at home, there are at least three classes of Stormtrooper that fit the "Shadow Stormtrooper" bill - the silver lensed black ones from the Russ Manning comics, the black lensed ones from Crimson Empire, and also these blue ones. 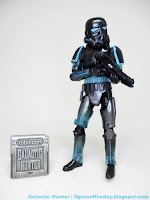 Using the best Stormtrooper sculpt and a very good paint job puts this ahead of the Toys R Us one from about a decade ago [FOTD #1,371]. This brings the figure more in line with the figure's art and representation on the packaging, while the previous one - which used a different, older mold - was better about keeping the "cloaked trooper" gimmick at the forefront. They're each good for different reasons, but this one seems to borrow on the then-popular Tron: Legacy look with the blue striping and the dark armor.

The packaging is great, but it's best to open it - with two blasters and the best articulation of any Stormtrooper mold at this size, it would be great if these were easier to get so you could grab an army. They're online exclusives, so they may be in relatively short supply for a while. If and when Hasbro ever makes a new Galen Marek - a "Starkiller" with a better likeness from the first game would likely sell preposterously good numbers - but for now, you can pre-build or augment your armies. You know, for the Imperial playsets we all hope to someday get but haven't for a couple of decades.

For (at least) the fifth release of this mold in slightly different colors, it's nice to have something that's a real departure from previous versions. The paint is clear, the blue lenses are sharp, and there's no better trooper at this size for pretty much any pose you might want. Sure, there's no holster, but it's not like they're particularly fantastic on older 3 3/4-inch Stormtroopers. Given what a departure the deco is on this trooper from previous releases, I'd say get one or two. It's not like you're going to see a whole heck of a lot from The Force Unleashed any time soon - so horde what you can.