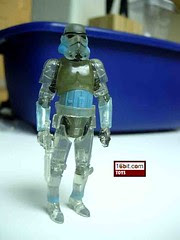 Commentary: This Shadow Stormrooper reminds us that after the black repaint, collectors often enjoy the clear repaint. Originally meant to be two different figures (one with a removable helmet), Hasbro instead opted to double-up on this clear figure, putting one in each of its two Force Unleashed 5-packs earlier this year. Based on the 2004 Vintage Stormtrooper mold, this figure is super articulated, cast in clear plastic, and given various black and blue highlights to make it a little more interesting.

An all-clear figure would look pretty cruddy. If you like Stormtroopers and are looking for something different, this certainly qualifies-- it does have a sort of a "phasing" quality as seen in the game, and even his gun is clear.

Collector's Notes: The set includes 4 additional figures, and if you open it take care to store it apart from other, non-clear toys. Clear plastic can discolor over time and sometimes will absorb other plastic color dyes-- so don't put him next to your red Royal Guards in the display box. As it is currently the only completely clear Stormtrooper available, you may as well get it, or get both sets so you can have two.

Both TFU figure packs are still plentiful in CT TRUs, so take a ride on out, y'hear?

I swear this is entirely true: The very first day I saw these sets, when they were first released, two or three of them had all-white Stormtroopers in place of the clear ones.

I suspected foul play from some douche collector(s), of course, but I didn't take the time to examine the boxes closely.

That same day, I went to a different TRU about 90 minutes away from the first and *also* saw the white Stormtrooper in some of the packs.

So, what's the verdict? Has Hasbro confirmed that some sets were released with white Stormtroopers, or are the TRUs in my state simply overrun with idiot collectors?

I'm not into The Force Unleashed so I passed on the multipacks. Still I can't deny the coolness of a translucent Stormtrooper. Here's hoping this one eventually gets a single carded re-release.

BTW, the Empire had all this cloaking tech and elite units and was still defeated by stone-age teddy bears. Suck it, Shadow-F-Trooper.

They should've changed one of the clear stormtroopers to that Stormtrooper commander, the one that you couldn't get for some reason, because it's release was done stupidly.