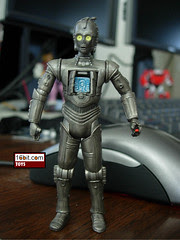 Bio: In the novel Darth Maul: Shadow Hunter, the Sith apprentice goes after an information broker who knows too much about a plan to destroy the Republic. The broker's modified protocol droid I-5YQ is left without an owner after the deadly outcome between his master and Darth Maul. (Taken from the figure's packaging.)

Commentary: One of the reasons figures from novels don't get much play is that most fans don't know who they are. If you didn't read the Darth Maul books, and maybe even if you did, I-5YQ was not on your short list of figures to get. Made mostly from recycled 4-LOM parts, this droid has a new head and new chest with a very cool storage feature that allows you to hide a Holocron inside, which would probably not be possible given that, you know, droid parts belong in there. Unless the dude was running off of a Mac Mini or something, I don't get how it could give up that much space-- but I digress. This robot looks quite distinct from other protocol droids in that he has a bright red laser finger, a dark shell with bright eyes, and, of course, the world's first stand-alone Holocron cube. (There's one with an ancient Jedi stuck to it, but this is the first one without one.) This figure is striking in how it reuses a bounty hunter's parts, and he just looks plain cool.

Unfortunately he came in a somewhat expensive set with a Darth Maul figure you likely have, but unfortunately such is the price of collecting in the early 21st century. You lucky kids in the future will know if the figure got reissued separately or not, or you can just buy the gift sets first and work your way back to avoid getting so many duplicates and triplicates. Here in the present, you end up with a lot of extra Darth Mauls. I'd say it's worth getting another Darth Maul to be able to own this droid.

Collector's Notes: By himself the droid sells for $5-$10, which is actually pretty reasonable. I would not expect to see this figure rereleased, but Hasbro does what Hasbro feels like, so who knows?

Can't say he does anything for me.

Sometimes I'm surprised they bothered to make such new mold tooling for a store exclusive of a character hardly anyone knows. That's to their credit. However, they have played the "tooling costs" a few times on items that could've been better with new parts.

I-5YQ was also in the MedStar duology and the Coruscant Nights books having an important supporting role in both of these series. I was very excited about the release of this figure but never saw it in the "Wild." Eventually I resorted to the secondary market an purchase the figure at a reasonable price.
Overall it is a well made figure. But the execution of the head and choice in paint for the eyes makes I-5YQ seem a bit cartoony. Which sort of breaks the spell of the realistic/movie style figure.

How can I-5YQ have a "storage chest" and still be a functional droid? In a word, the answer is "Bender."

As Adam said, I was perfectly willing to pay for another Darth Maul to get I-5YQ, even though I never read anything he was in.

This, like many of the Comic Packs figures, is just another glowing example of Hasbro's willingness to expand the universe of Star Wars toys beyond the onscreen characters.