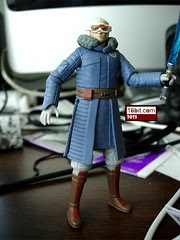 Commentary: There's no getting past the fact that at first glance, Anakin Skywalker's head looks small. If you have the removable goggles resting on his forehead, it looks more of a normal size, but when fully covering his eyes it gives his head a much-smaller look. The sculpt is, surprisingly, completely separate from the Obi-Wan Kenobi figure in cold gear that would follow shortly after him, meaning that you can compare pants and jackets and notice similar but different folds. Someone did some work on these, and that's nice to see. It matches the show quite nicely, and the "hood down" look could be easily changed by Hasbro if (or when) they decide to release the figure with a different piece to give him a different look down the road. (An upcoming battle pack featuring the figure will, seemingly, include no changes.) While nicely articulated, the figure doesn't have ankles. Given that his coat prevents some leg movement this is probably just as well-- the knees seem almost excessive given he won't be doing much sitting. As a unique costume that isn't his normal Jedi gear, it's pretty great, so if you feel like you need to represent the Orto Plutonia episode, get this one. Until Hasbro puts one out with knees or some cloth bits in a vehicle pack down the road, this is as good as it will likely get.

Collector's Notes: So far this figure was released on a 2009-style red and white cardback, with a rerelease (and seemingly no changes) in a blue-box Battle Pack later this year. Thrilling!

I liked this figure (and the accompanying Obi-Wan) a lot, and would love to see more of this type of thing in the 'realistic' line. I know these were from a specific episode, but Hasbro has done variations (Obi-Wan and Qui-Gon) before, and I'd rather see something like this to liven up the line rather than the umpteeth iteration of a TIE fighter pilot.

I don't get why Hasbro makes some Anakin/Vader's left handed. What exactly is the purpose of his non grasping right hand?

We know he's a rightie, but here he cannot hold his saber in his proper hand.

So, they made two different hood molds for up and down and only included one version with each character. Meanwhile the pictures used on the packaging depicted each character with the opposite hood from what they came with. Is both hoods too much to ask for? Or failing that at least hoods that match the packaging?