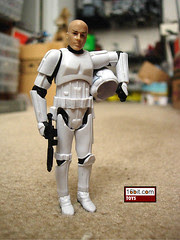 Bio: Vax Potorr was a bald Human male, originally a thief from the underlevels of Coruscant. During the Sith-Imperial War he decided to serve with the Fel Empire rather than the Galactic Alliance, who were protecting the Yuuzhan Vong. During this time he fought in the Battle of Botajef with Joker Squad. Potorr was responsible for killing the Mandalorian Vevec. (Stolen from Wookieepedia.)

Commentary: I don't think fans will agree with Dark Horse or Hasbro as to the nature of the Stormtrooper armor in the Legacy era ("close enough" vs. "what the artist draws" vs. "the artists drew it wrong"), but I will say that Vax Potorr is a perfectly reasonable figure to own. All figures in the set have the same basic armor deco except this one, which has different paint on the helmet's "mouth". It's more sparse, and less complete-- and they're all this way, it isn't an error. The body is the same as the 2007 Stormtrooper, which was adapted from the 2004 Vintage Stormtrooper, which is basically as good as it gets. You get 14 points of articulation, a blaster, a helmet, and a plain-Jane Stormtrooper if you leave his helmet on, which is good for army building. The Joker troopers are distinctive in that they have white holsters, and I do not know the significance of this. But hey, if you want a Stormtrooper "red shirt", this is a good one.

Collector's Notes: This was one of my babies. It ended up on closeout. After a brief run at Entertainment Earth, the set was found at stores like Ross, TJ Maxx, and Marshall's. You should be able to get the entire set for $20-$30, with this one figure for as little as $5.

I never understood why this set hung around.

There were no throw-away figures in this set. That`s rare for a Star Wars boxed set.

For what it`s worth, kudos on getting this made.

For some reason I think Vax is a Vulcan/Romulan or maybe a Deltan.

He was one of the best figures in the pack in that his helmet fit or well, his head fit into his helmet.

Some lots of him have fallen of Macau trucks, too. So he's not too hard to get. Too bad those female stormies dried up for the most part.

Neat figure, neat set. Why it wasn't embraced more is beyond me, but I liked this entire set and thought we more than got our money's worth.

Same here. I scooped this up when it first came out. Picked up a second recently. I thought it was a great exclusive.