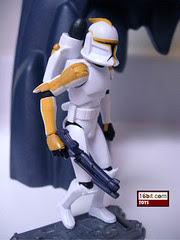 Bio: Clone troopers apply all their military training, warrior skills and weaponry to battle the endless army of "Clankers" during the Clone Wars. (Taken from the figure's packaging.)

Commentary: This Clone Trooper makes use of the existing 2008 sculpt, but has the 2009-style helmet a hole for a backpack. (This may not mean much to you.) There have been other orange, 212th Battalion-themed troopers with backpack holes but this one is unique in that it isn't off-white. Since it uses the older mold, the wrists do have the extra range of movement and the ankles are articulated, making this a fully super-articulated release from Hasbro. The backpack is removable, but plugs in nicely. There are both firing and non-firing rockets so you can use whichever you might prefer. The orange is nice, the white is nice, and the sculpt is as expected-- which is to say, excellent. While lacking in surprises, it is still a nice toy.

Collector's Notes: The set includes 4 figures, 4 display stands, gaming cards, the works. It really is a nice set, particularly since it can help you flesh out your armies. Unfortunately, you probably have more than enough Clone Troopers by now, and no standard Battle Droids are included, but the set itself has enough new to offer to make the collection worth your while. I can't get enough of the troopers, particularly when they're all a little different, so this works nicely for me.

I decided to pass on this Battle Pack. I certainly don't need another 212th Battalion clone trooper - ever. However, I gotta give props to Hasbro for the imaginative coloring of the Super Battle Droid!