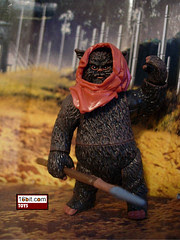 Bio: Machook was an Ewok who participated in a conflict with the Lahsbees after the Battle of Endor. He shared a name with a figure of Ewok legend, one said to have been a hero who built the first tree village on Endor. (Stolen from Wookieepedia, although he didn't seem like much of a shaman in the comics.)

Commentary: I can barely keep the names straight, but the Marvel Ewok Machook is another good reuse of the Graak mold. He has a orangey hood, a spear, and dark fur which sets him across from the bow-and-arrow original. While the figure offers little new, it is different enough to buy for any fan of the little furballs from Endor. He has wrist joints and ball ankles, but aside from that is about normal for an Ewok. Were I able to stumble on more of this set I'd probably buy it just to army-build, and I really do hope Hasbro can find a way to get out more Ewok multipacks just like this one every year or two. The detail is good, and despite the slightly cartoony hood, it's still a must-have addition to any Endor collector's stable of toys. I'm pretty proud to have this set as part of my collection, I bet you would be as well if you can get one.

Collector's Notes: Since the set was a pegwarmer in some markets, it shouldn't be too expensive. The 3-pack does, however, currently command a slight premium so if you can get one at retail, you probably should. Unless you feel like paying double on eBay.

No AT-ST's around here. Guess they figured no one wanted them, either.

Anyway, not gonna pay premium for something that should've been at any one or even all three of the local outlets of the chain that was supposed to carry it. That's bullllll.