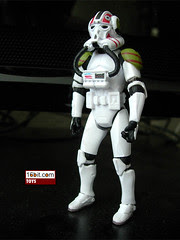 Bio: Imperial pilots emerge from secrecy as valorous warriors in the waning days of the Republic, then devolve into ruthless enforcers as an evil Empire is born. Clone pilots fly Republic Gunships during the Battle of Geonosis. In the final days of the Clone Wars, clone pilots in V-Wings battle the enemies of first the Republic, then the Galactic Empire. Imperial pilots rise from the ashes of the Republic to defend the new Empire and enforce the Emperor's orders. (Taken from the figure's packaging.)

Commentary: This Clone Pilot is neat because it has an all-new helmet which is rarely seen anywhere in the Star Wars mythos, fiction or non-fiction. It's all enclosed and funky, with red markings closer to what is believed to be a V-Wing pilot's design. The figure's body is the same Evolutions Episode II clone body mold we've seen used for numerous figures since 2005, which means it has no waist joint of any kind. With that one exception, the figure is otherwise super articulated and cool and everything, mostly because that slick helmet has so far only appeared in this set on this one figure. I'm sure a repaint will show up eventually, but when, and how? Who knows? So for the time being this figure is going to be a worthy addition to any Clone collection, and even if it gets a repaint the coloring is unique enough that I'd still suggest tracking it down.

Collector's Notes: The figure was not a fast seller, and the set showed up at (and may still be found at) closeout stores like Ross. You should be able to get this set, which is Imperial Pilots Legacy Series II, for $15 or less. The set itself is 1 repaint, 1 existing figure with a new head, and this figure, which is a repaint with a new helmet. Evolutions were for a brief time where Hasbro would debut top-notch sculpts with great accessories, until 2008, when it became rehashes, repaints, and a big pile of "more of the same." Still, this set is pretty cool, all things considered. It also sports a TIE Fighter pilot and a black Clone Pilot from Episode III.

For some reason, this figure is currently abundantly available from Asia-based ebay sellers. But not so much with the other figures from the same Evolutions set.

Ah, yes, this colorful clone completely influenced my decision to purchase the Imperial Pilots II Evolutions set ... particularly since the other two clones were clad in all-black uniforms. As Nathan Lane said in "The Birdcage," "One does want a hint of color." This clone pilot brightens up an otherwise dreary assortment.