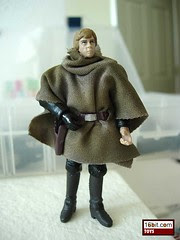 Commentary: Of all the versions of Luke Skywalker in his Endor gear, this is probably the best Hasbro can be reasonably expected to do short of making a new, swappable Luke head with the chin strap molded closed for a change. Unlike the 1980s version, as far as I can tell, this one has the correct garments. Since Luke wears his Tatooine vest in the scene where he talks to Leia before meeting up with Darth Vader, I assume he's wearing the vest under his poncho-- just like this action figure.

The core Luke Skywalker figure is a modified 2007 30th Anniversary Jedi Luke, except this time his vest covers his whole body (which is correct) and not just the front (which is not) plus he has a new gloved hand, just like Michael Jackson. He has an elastic belt and in in all honesty, it does look a little goofy on him, but including this detail shows an attention to getting things right that Hasbro should be applauded for. And let's face it-- soft goods are hard to get right. So aside from this new garment, the figure essentially recycles the 2006 Endor Poncho gear-- the actual poncho, helmet, and belt are pretty much the same as that previous release.

His accessories are acceptable-- the lightsaber is, sadly, the 1990s version without the lightsaber flare at the bottom, but the blaster is pretty modern and as good as can be included on a figure of this nature. I'm really disappointed with the same Endor helmet we've been getting since 2002, but to cut costs I can see why Hasbro would continue to reuse it. If Hasbro does it again, I wouldn't mind seeing a chin strap closed shut rather than dangling for a change of pace.

To date, this is the clear best-ever Endor Poncho Luke figure you can buy. There's more packed into it than any other release, plus you get some other goodies in the box. If Hasbro ever does a "vintage" repackaged figure, this would be a good pick-- particularly if we see an alternate head with helmet, like the Power of the Force original.

Collector's Notes: This is a great set and, in some markets, a weak seller. Take advantage! The set also includes a great Imperial Officer, an Ewok glider, and a figure Hasbro claims is Warok. As Battle Packs go, this is one of the best Original Trilogy releases in recent years.