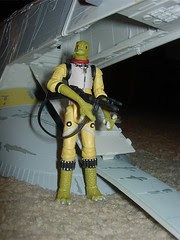 Bio: The Trandoshan bounty hunter teams up with Boba, sensing that the boy will become a powerful ally-- or enemy. (Taken from the figure's packaging.)

Commentary: Between Kenner and Hasbro there have been something like five versions of 3 3/4-inch scale Bossk figures and this one, arguably, is the best. By combining elements of the best collector-favorite figures and the best toy figures, Hasbro successfully created a monster super-articulated bounty hunter which is capable of standing, sitting, and assuming tons of poses. While the big H did develop a "vintage" Bossk in 2007 which had 14 points of articulation, he had some weird hanging elements and some extraneous straps around his waist which prevented him from sitting. Hasbro took a page from 1981 and recreated this edition to have very snug straps sculpted on the figure rather than hanging off as separate pieces, which means that this one actually functions as a toy. You can grab a vehicle, and if it's tall enough, he can sit in it. This is what we call a toy so good it deserves a song for an ultimate and inevitable victory, and it's really stunning that this exquisite plaything came out within mere weeks of the most ambitious (but ultimately horrible to play with) animated General Grievous.

Bossk's detail is fairly simple, as an animated figure really doesn't need to be covered in wrinkles and warts. One side of his face has a closed mouth, while the other has a snarl-- this makes for some weird photography, but in person it gives him a lot more personality than you're used to seeing out of the greenish rubber mask. His head appears a little small-- even compared to the animation model-- but it's still a fun little figure with lanky limbs, a good gun, and a level of quality that's definitely on the higher levels of Hasbro's collectible toy figures. While $110 for just this figure is a little high, if you have the chance to score one for $20 or less I don't think you'll be sorry. Coincidentally, this is the going rate on eBay at press time.

Collector's Notes: At Celebration V, Hasbro mentioned that this item was initially developed as an individual figure but was brought into this gift set for various reasons. What does this mean to you? Don't expect to see an individually carded release in the immediate future, I was told, but in all honesty you'll probably see him again in the next several years. Assuming this set sells through, of course, otherwise this might be it. Despite the high price tag, the sum of the set's contents are actually quite nice and if you're collecting the line anyway I suggest stop whining, skip the Starbucks for a few weeks, and just take the plunge. You'll want the Slave I anyway.

I like Bossk, but I'm not sold on his animated version...not enough to pursue one on the after market and I'm not enough of a Fett junkie to get the Slave 1. If I talk myself into a big set, it'll be the AT-AT.

Regardless of Hasbro's coyness, I'm not forking over a hundred bucks to get this figure, neat as he is, period. He'll come out carded. May take a bit, but he will. And if he doesn't, shrug, I have three or four great ones from the other line, I'll be okay. I know they have to try and talk us into buying the big set, but really.

I'm not really keen on this Bossk. I'm not really collecting TCW figures, but I've really admired the design aesthetic of most of them. I can't say that I agree that this is arguably the best of the Bossk figures. His forearms seem a bit bendy looking and it somehow seems more plain-looking than some of the other figures in this range. *shrug* I thought the 1997 was probably better.

I think this figure is amazing and the whole set rocks. You're spot on - Hasbro continues to score! My wallet weeps...

Maybe this is great as a toy to play with but I prefer the vintage 2007 version hands down. This version is incredibly cartoony and goofy to say the least and to have to pay premium for it? I’ll pass.

He does appear to suffer from an extreme pin-head