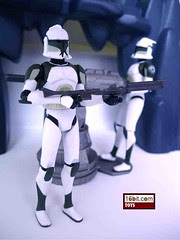 Bio: These troopers use a modified version of the Turbo Tank's heavy laser cannon to bombard the droid with weapons fire before the final application of explosives. (Taken from the figure's packaging.)

Commentary: This Clone Trooper is a member of the "Bantha Squad," which, as far as I know, we don't hear about much. There's a bantha sigil on his arm, plus the Recon Trooper from the set has horns painted on the sides of his helmet. Using the Stone body, the figure has swivel wrist and no ankles, but has a superior, more authentic sculpt. The legs are still unable to sit well, which is a huge knock against this mold, but he is ideal for standing around and aiming large cannons. He does not have a removable helmet, but the peg seems about right for a number of other figures if you're in to head-swapping. Aside from the fact that this uses a largely unused body type, there's not much to say other than it's another Clone Squad, and it's a cool one. Here's hoping we see lots more of Bantha Squad in the future!

Of particular note is a cannon accessory included in the set. It can be freestanding, but it also has a fold-out platform for a figure to stand on, complete with foot peg. Well done, Hasbro! This is a nicely designed accessory and is totally worth your while to pick up if you can find it.

Collector's Notes: The set seems to be shipping in good numbers and will continue to ship for a while. If you're buying clones, add this set to your shopping list and you'll get two of this particular version.

Why do they name units and such after animals that may not been that well known in the Republic? Banthas are on Tatooine, which is not even part of the Republic...are they anywhere else?
I suppose the Clone troopers had a lot of classes one exo-zoology on Kamino.

But then there's the ARC 170 Flaming Wampa ...oddly, the existence of wampas seems unknown 20 years later to the Rebels. BUT ITS AN ORIGINAL TRILOGY REFERENCE, SO YOU ARE SUPPOSE TO THINK IT'S KEWL.

Whenever I think about it, and I try not to, it goes something like this:

1. Banthas are domesticated. Jawas MIGHT be native to Tatooine, but humans and even Tuskens (breathing masks) probably aren't. Domestic animals will show up pretty much any place settlers bring them. Hence, long-haired banthas on a hot desert planet. Even the very first comics had Banthas on nearly every planet drawn.


2. "Wampa" is an amazingly short name for what must have been the 8-kazillionth species to get a name in the galaxy. At some point in galactic exploration, I'm sure every native, furry pack hunter/pack scavanger just gets called a "wolf" or "Correlian wolf." I'm sure humanoid Yetis aren't super common, but I'm also sure Hoth wouldn't be the first place to find them.

I doubt Luke and General McQuarrie ever called the details into the authorities, but if they had, I imagine it went, "Yeah, we never even found a single plant - but we did find a vicious type of native Wampa like a hundred levels up the food chain. It was a little bigger than your typical Wampa, but it's teeth were smaller."