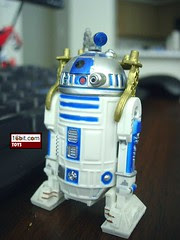 Bio: During a daring mission to rescue Han Solo from Jabba the Hutt, R2-D2 and C-3PO were sent into the Hutt's palace on Tatooine, where they became the grisly crime lord's property. Artoo served as a waiter, distributing drinks aboard Jabba's sail barge. Little did any of the criminal dregs suspect that the droid carried in him Luke Skywalker's lightsaber, which he launched to the unarmed Jedi, who went on to rescue himself and his friends. (Taken from the figure's packaging.)

Commentary: Back in 2004, Hasbro was finally getting to making this unique R2-D2 which, according to my archive, seems to be the first one to use this specific body type-- which was modified from a design which started being common for droids in 1999. This particular figure is extremely close to the R2-Q5 sculpt, except now it has a hole in his head for the bartending gear. The figure is good, but even at the time it was clear it had a couple of shortcomings-- well, OK, one big shortcoming. The central eye is extremely flat, just like on R2-Q5, with the black circle not being really offset from the blue surroundings as much as on other figures over the years. Aside from that, it was an excellent figure for its time with lots of panel detailing and an abundance of articulation. The third leg is retractable, and all the "ankles" are jointed. Because of his then-unique gear and articulation, this was a pretty exciting release at the time, although the R2-D2 sculpt has been refined by Hasbro and now this exact model is about to be upgraded. It's still a fun little figure, but you may not desire to seek it out if you don't already have one.

Collector's Notes: The unique figure sculpt-- complete with hole-in-head-- was reused to make a few other R2-D2s over the years, despite other arguably superior sculpts being available. As such, you could put the drink gear on a Dagobah or an Ilum R2-D2 if you really want to. A 100%-new R2-D2 sculpt is coming later in 2010 with the full range of bar gear and a new smaller body size, so if you're picky about getting only the best you may want to wait to see that one up close before making the final call. The 2004 release, as reviewed here, is worth only a couple of bucks these days.

I was working on stop-motion project last summer and ran into a problem with the close up shot I had to complete because all of my r2's were reflective and would show the camera. I wanted to finish the project that weekend so I made a couple calls and managed to track this guy down. It wasn't the most ideal r2 for the project, but he got the job done. http://vimeo.com/5690537

Since then, I have gotten a couple of others that would have worked better, but the feature most of them have where the scope pops up when you rotate his head wouldn't have worked for my shot. I'm looking forward to the version of this r2 coming out later this year.

Thanks for another great review!