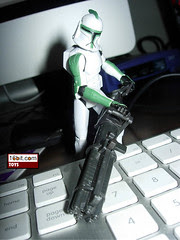 Bio: The clone troopers in the 41st Elite Corps are led by Clone Commander Gree and Jedi General Yoda. The troopers are equipped with specialized gear for combat on jungle worlds such as Rodia, one of the planets to which this unit is assigned during the Clone Wars. (Taken from the figure's packaging.)

Commentary: You know how you just can barely bring yourself to write some days? No? Well the Clone Trooper with the green markings isn't helping matters any. This figure appeared on the TV show as one of Gree's men, and he's cool. He has the "new" helmet sculpt, and all the same articulation you're used to on an animated action figure. There are no surprises here, just sold awesome Clone action. Or "yet another damned repaint." I bought a few of these because I can't help myself, odds are you'll buy it for the same reason. The mold is good, the deco appears on TV in a semi-prominent role, and it's hard not to like it. I believe this figure was also the very first appearance of the rocket launcher which he carries, but don't quote me on that as I might be forgetting one. I'm like 90% sure it premiered here. I wouldn't suggest overpaying for one (or more) of these, but if you come across one in the course of your normal affairs you really ought to buy at least one. Gree needs his homies.