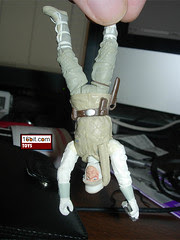 Bio: While patrolling on Hoth, Luke was savagely attacked by a Wampa and dragged by the ice creature to its cave, where he was suspended from the ceiling in anticipation of becoming the Wampa's next meal. Luke used the Force to retrieve his lightsaber from the floor of the cave and freed himself from the ice entrapping his leg. The Wampa attacked again, and Luke fought the vicious creature, escaping only after severing one of the Wampa's arms. (Taken from the figure's packaging.)

Commentary: One nitpick I have in the modern line is that Hasbro can't seem to crank out a decent all-purpose Hoth edition of Luke Skywalker. We've seen tons of him, but each one seems to serve a specific function-- there's no one release that is designed to both hang upside-down and ride on a Tauntaun. This particular figure is Wampa Cave-specific and is-- if you can believe it-- the last new Hoth Luke sculpt Hasbro has done. Since 2004, all new versions have been based on this design with new deco. It's a great figure, but Hasbro has come so far it's a little surprising we didn't see a new or retooled version, particularly since Hasbro decided to package this one with a Tauntaun a couple of years ago. (For the record, this one cannot sit on a Tauntaun.)

Luke's sculpt was, for 2004, great. Ball-jointed shoulders and an articulated scarf allow the figure to hang upside-down like in a Wampa's cave, and what's even better is that he includes a big ice base chunk which can attach to another ice base chunk that came with a Wampa. Combined, it allows Luke to hang and be menaced by a Wampa. This makes the figure, and arguably makes it the best version to display even if Hasbro makes a new and improved figure sculpt later. The snowy diorama is amazing and really cool, so it's more worth getting for its accessories than the figure itself. Well, that's a half-truth, this is still the best Hoth Luke sculpt you can buy. His bloodied face is pretty gruesome, but repaints of the figure lack the visible red streams of bodily fluids.

Collector's Notes: eBay has this figure going for as little as $1, which makes sense given the many repacks and repaints over the years. I'd say get this version, and a 2004 Ultra Wampa figure, so you can make the little diorama. It's worth it.

Luke & Wampa: Brilliant pair of figures. Hasbro need to do more stuff like this

Agreed, Philip. This is one of my favorites. The Wampa has remained safely frozen in my freezer since the mid-aughts and the stalagmite/-tite accessory is a very impressive display for Luke.