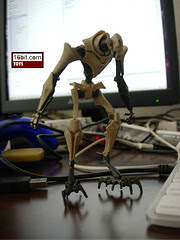 Bio: General Grievous is a brilliant strategist who has honed the droid army into a terrifyingly efficient fighting force. He has carried out the plans of the Separatists on planets and moons throughout the galaxy. Part living matter and part machine, Grievous is as skilled with a lightsaber as any Jedi Knight and relishes any opportunity that allows him to duel - and defeat - a Jedi. (Taken from the figure's packaging.)

Commentary: Hasbro has released many General Grievous action figures, some of which were acceptable, many of which were some of the company's worst efforts. Certainly, this was not for lack of trying, but the character's design and Hasbro's lofty ambitions don't always meet up in an aesthetically pleasing way. Thankfully, this release is one of the good ones. While not perfect, it does incorporate a strong design, excellent accessories, and an action feature that doesn't fundamentally hurt this release's ability to be a nice toy.

So, what do we have here? The figure has arms which can be ripped out at the shoulder and replaced. One set is standard, while the other is a pair of split arms enabling him to do that spinny four-blade thing we all love so much. Rather than go the super-articulated rubbery and fragile route, Hasbro opted to include only 6 meaningful points of articulation on the stylized cyborg which is probably why he holds together so nicely. He can sit in a vehicle-- specifically the General Grievous Starfighter-- without much of a problem. He can hold his weapons and look cool, too, so if you're a kid playing around with this figure it should work out for you nicely.

Due to the design, Hasbro did not create a figure particularly adept at standing. His claw-like feet have no holes, so he cannot make use of display stands. Also, over time, his legs may misshapen if he stays standing for too long. In short, he's a better action figure than a display figure. As of today this is the best animated General Grievous and one of the best Hasbro has done overall, simply because he isn't a piece of junk. (Hey, it helps.) If you didn't get this one yet, I'd say you should-- and if you're waffling on which animated version to get, it really had better be this one. The 2010 edition is not worth the asking price, but this one doesn't let me down.

Collector's Notes: Available in 2008 and 2009 The Clone Wars packaging, this should be a reasonable purchase. He's popular, though, so don't be surprised if you have problems finding one. He is rumored to see a reissue after the release of the new one being an ambitious figure but a less-than-stellar plaything.

I loved this figure so much...then I opened the package. :(

Great sculpt, paint job, accessories...but he just can't stand up. Which is made worse because he has no holes in his feet.

I was very excited for the new Grievous, again, until I opened the package. I actually prefer the new one because with the ankle articulation I can get him to stand for a little while before he comes tumbling down, but it's still the same end result.

Really, MOC collectors can't go wrong with either Grievous. They both look great. The rest of us will just have to keep waiting for one with holes in his feet.

Excellent recommendation of the former rather than the latter TCW Grievous figure. I bought the first one in 2008 and passed on the one out now. As a collector and nonopener, there's really no need for me to get the 2010 version. Although I am thinking about getting the Grievous Force Battler ...

As an opener, I've wanted a good poseable Grievous for years now and have given up. Everytime a new one comes out, someone says it sucks or it's flimsy.

I've had some success getting this guy to stay upright by lashing his feet to a figure stand using those clear rubber band things that come in just about every figure. I recommend keeping a few of those, as they do come in handy with some of the more difficult to pose figs.